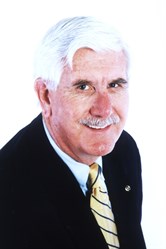 Richard J. Glassock, MD, FASN, graduated from the UCLA School of Medicine in 1960 and received post-graduate training at UCLA, Harvard, and Scripps Research Institute. His main interests are in glomerular disease, CKD, and clinical nephrology. He has published over 750 original papers, books, book chapters, and reviews. He is the Past President of the American Society of Nephrology (ASN) and the National Kidney Foundation (NKF) and Past Chairman of the American Board of Internal Medicine. He is the former Chair of the Departments of Medicine at the University of Kentucky (1992-1999) and Harbor-UCLA Medical Center (1980-1992). He is a Master of the American College of Physicians and a Fellow of the Royal College of Physicians (UK).

He was the founding Editor-in-Chief of the ASN NephSAP and Journal of the American Society of Nephrology (2002) and is an Editor of the nephrology section of UpToDate, an Associate Editor of the American Journal of Nephrology, and a founding Moderator of the ASN Communities online site. He has received the NKF David Hume Memorial Award, the ASN Robert Narins Award, Distinguished Achievement Awards from UCLA and the Association of Professors of Medicine, the Torchbearer Award of the American Kidney Fund, and the Medal of Excellence Award from the American Association of Kidney Patients. He is currently Professor Emeritus at the David Geffen School of Medicine at UCLA and an independent medical consultant.