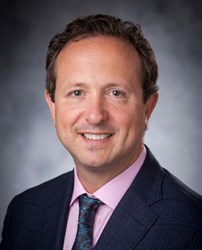 Myles Wolf, MD, MMSc, is the Charles Johnson, MD, Professor of Medicine and Chief of the Division of Nephrology at the Duke University School of Medicine. He received his MD from the State University of New York–Downstate, completed Internal Medicine and Nephrology training at the Massachusetts General Hospital, and obtained a Master of Medical Sciences degree in Clinical and Physiological Investigation from Harvard Medical School. After serving on the Harvard faculty for 6 years, Dr. Wolf moved to the University of Miami Miller School of Medicine, where he eventually served as Chief of the Division of Nephrology and Hypertension, Director of the Clinical Research Center, and Assistant Dean for Translational and Clinical Research. Subsequently, he spent 3 years at Northwestern University Feinberg School of Medicine as founding Director of the Center for Translational Metabolism and Health and as Director of the Department of Medicine’s Physician-Scientist Training Program. Dr. Wolf moved to Duke in 2016, where he is responsible for developing the vision and executing the operational strategy of Duke Nephrology across its clinical, research and educational missions.

The focus of Dr. Wolf’s clinical trials, patient-oriented, epidemiological and laboratory research is disordered mineral metabolism across the spectrum of kidney diseases from early stages to ESRD and following kidney transplantation. His primary contributions have been to characterize the central role of FGF23 in phosphate and calcium homeostasis in health and in disease, and the deleterious effects of excess FGF23 that increase risks of cardiovascular disease and death. Dr. Wolf discovered that FGF23 mediates intravenous iron-induced hypophosphatemic osteomalacia, leading to updated warnings by the FDA, EMA, and other regulatory agencies. Since 2002, Dr. Wolf’s research has been supported by the American Heart Association, National Kidney Foundation, American Society of Nephrology, and National Institutes of Health. He currently leads “HiLo,” which is a randomized multicenter pragmatic clinical outcomes trial of phosphate management in more than 4000 patients with ESRD.

Dr. Wolf has served on editorial boards for J Am Soc Nephrol, Clin J Am Soc Nephrol, Semin Nephrol, and Nat Rev Nephrol, as an ad hoc reviewer for many other journals, and as Editor of the Mineral Metabolism section of Curr Opin Nephrol Hypertens. Dr. Wolf has delivered numerous invited lectures on his research domestically and internationally and has received several teaching, mentoring, and research awards.