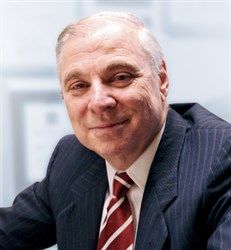 Theodore I. Steinman, MD, FASN, is a Clinical Professor of Medicine at Harvard Medical School and Founding Director of the Dialysis and Transplantation Program at Beth Israel Hospital in Boston. He serves as a senior physician at Beth Israel Deaconess Medical Center and Brigham and Woman’s Hospital, Boston.

Dr. Steinman completed his undergraduate education at Penn State University and then completed his medical training at the Georgetown University School of Medicine. His medical internship and residency at Cedars-Sinai Medical Center, Los Angeles was interrupted by the Vietnam War, in which he served as a Marine Battalion Surgeon from 1966–1967. His training then resumed with a second year of medical residency at Beth Israel Hospital from 1968–1969, and then nephrology fellowship training at Tufts New England Medical Center, with specific dialysis and transplantation training at Brigham & Women’s Hospital (then Peter Bent Brigham Hospital).

Dr. Steinman resides in Brookline, MA with his wife, Carol, being married 51 years. They derive enormous pleasure from their 3 sons, 2 daughters-in-law and 5 grandchildren.