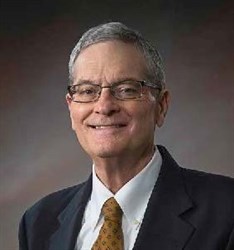 Thomas D. DuBose, Jr., MD, FASN, was Professor and Chair of Internal Medicine and Professor of Physiology and Pharmacology at Wake Forest School of Medicine from 2002–2013, and is currently Emeritus Professor of Medicine where he remains actively involved in research and teaching. The aim of the research that Dr. DuBose and his colleagues are conducting is to elucidate factors governing the regulation of tubule transporters involved in urinary acidification and potassium homeostasis. Some of these transporters have been implicated in monogenic diseases associated with renal tubular acidosis, chronic metabolic acidosis of chronic progressive kidney disease, or abnormalities in potassium balance and blood pressure regulation.

Dr. DuBose has served on the Council of the American Society of Nephrology (ASN) and also served as the society’s president from 2005–2006. He continued to serve ASN in a leadership capacity as Chair of the Chronic Kidney Disease Advisory Group from 2007–2011 and has represented ASN on the Council of Subspecialty Societies.

In 2012, Dr. DuBose was the recipient of ASN’s prestigious John P. Peter’s Award. Other honors he has received include the Donald W. Seldin and President’s Award from the National Kidney Foundation, the Distinguished Achievement Award from the Council on the Kidney in Cardiovascular Disease of the American Heart Association, and the Established Investigator Award in Basic Sciences from Wake Forest School of Medicine.