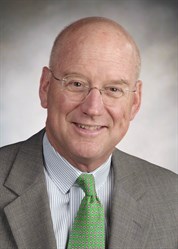 Dr. William Henrich is the President of the American Society of Nephrology and is serving as President of that prestigious organization in 2006 and 2007. He has been an ASN member for 24 years.

Dr. Henrich currently is the Dean of the School of Medicine and Vice President for Medical Affairs at the University of Texas Health Science Center at San Antonio. He also holds the John P. Howe, III, M. D. Distinguished Chair in Health Policy. He received his Bachelor's Degree from Columbia University and Medical Degree from Baylor College of Medicine in Houston, Texas.

Honors of Dr. Henrich's include the Outstanding Teacher Awards from the University of Texas Southwestern Medical School's and University of Maryland's Departments of Internal Medicine; National Kidney Foundation's President's Award in both 1989 and 1996; and election as the Commencement Speaker for the University of Maryland School of Medicine in 2002, 2003, and 2004. He is a Master of the American College of Physicians and serves on the National Diabetes and Digestive and Kidney Diseases Advisory Council. His research interests include hemodynamics on dialysis, analgesic-related kidney dysfunction, and hypertension. He is currently the Co-Chair of the Cardiovascular Outcomes in Renal Atheroscloratic Lesions trial funded by the NIH. He is the author or co-author of over 220 scientific publications and is member of several prestigious scientific organizations including the American Society of Clinical Investigation and the Association of American Physicians.

He lives in San Antonio, TX with his wife, Mary, and has two children, John and Emily.