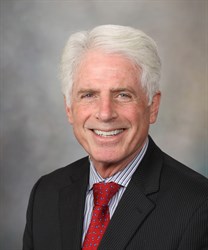 Stephen C. Textor, MD, is a consultant in the Division of Nephrology and Hypertension, Department of Internal Medicine, at Mayo Clinic in Rochester, Minn. Dr. Textor was born in Colorado and grew up in Minnesota. He attended Stanford University as an undergraduate and the University of California as a Regents’ Scholar for his medical degree. He trained in internal medicine and was Chief Medical Resident at the Boston City Hospital, before pursuing nephrology and hypertension under the direction of Norman Levinsky and Aram Chobanian at Boston University. Dr. Textor's career path includes a Fogarty International Research Grant in Lausanne, Switzerland during the development of first angiotensin-converting enzyme inhibitor, captopril, followed by an appointment to the research division of the Cleveland Clinic with a focus on renovascular hypertension and ischemic nephropathy. Interests in the relationship between hypertension, cancer, and transplantation expanded during a five-year tenure at the City of Hope National Medical Center in Los Angeles, before taking a position at Mayo Clinic, Rochester, Minnesota, where he is now Professor of Medicine, Division of Nephrology and Hypertension and an active participant in the Kidney/Pancreas Transplant Program of the von Liebig Transplant Center at Mayo Clinic. Additionally, Dr. Textor's professional interests focus on the relationships between blood pressure and the kidney, including renovascular hypertension. Working with colleagues in renal physiology and experimental imaging, he has explored the application of functional magnetic resonance imaging to evaluate tissue oxygenation in the kidney. He is the co-principal investigator of a recently opened “first-in-human” clinical trial funded by the NIH studying the use of mesenchymal stem cells to renew kidney function lost through the vascular occlusion.