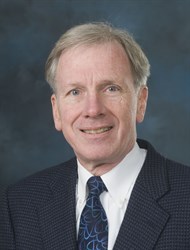 Dr. John Sedor graduated from the University of Virginia School of Medicine and trained in Medicine and Nephrology at University Hospitals of Cleveland/CWRU. He remained on the CWRU faculty, where he was the MetroHealth Research Endowment Professor of Medicine and Physiology and Biophysics. Dr. Sedor was named Nephrology Division Chief at the CWRU MetroHealth System campus in 1991, and he subsequently became the Vice-President for Research for the MetroHealth System CWRU campus in 2003. In 2017, Dr. Sedor moved to the Cleveland Clinic and holds the Ray W. Gifford, M.D., Endowed Chair in Kidney Research. He has received funding from the NIH for over 35 years and his current research effort is focused on identification of the molecular mechanisms by which the APOL1 protein confers chronic kidney disease risk. Dr. Sedor was Secretary-Treasurer and a Council member of the American Society of Nephrology through 2019. In 2019, he was appointed Chair of the KidneyX Steering Committee. In the local community, Dr. Sedor is a longstanding member of the Board of Trustees at the Kidney Foundation of Ohio and has served on the Cleveland Minority Tissue and Transplant Education Program MAB. Dr. Sedor is a member of the Association of American Physicians and the American Clinical and Climatological Association. He won the 2010 David M. Hume Award from the National Kidney Foundation, and in 2013, he was elected as a Master of the American College of Physicians.