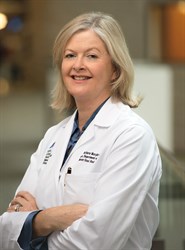 Barbara Murphy, MB BAO BCh, FRCPI, is currently the Murray M. Rosenberg Professor of Medicine and department chair for the Mount Sinai Health System. She is also dean of Clinical Integration and Population Health for the New York system’s Icahn School of Medicine.

Dr. Murphy earned her MB BAO BCh from the Royal College of Surgeons in Dublin, Ireland. She interned and completed her residency at Beaumont Hospital in Dublin, followed by a fellowship there in clinical nephrology. She completed postdoctoral training with a fellowship in nephrology at Harvard Medical School’s Brigham and Women's Hospital. While there she trained in transplant immunology at the hospital’s Laboratory of Immunogenetics and Transplantation. She is board certified by Ireland’s Royal College of Medicine.

Her research focuses on the use of high throughput genomic technologies as a means to understand the immune mechanisms that lead to graft injury and loss, with the aim of identifying gene expression profiles and genetic variants that may be used to predict outcomes post transplantation. In sum, Dr. Murphy’s participation has involved finding ways to directly impact patient access to healthcare, specifically regarding long-term coverage for immunosuppression.

Named by IrishAmerica in 2016 as one of its Top 50 Power Women and previously to its Top 50 in Health and Life Sciences list, Dr. Murphy also received the Icahn School of Medicine’s Abraham Jacobi Medallion. Among her many honors are AST’s Young Investigator Award in Basic Science and the Irene and Dr. Arthur M. Fishberg Professor of Medicine award at The Mount Sinai Hospital. She’s been named Nephrologist of the Year by the American Kidney Fund and received the Kidney and Urology Foundation of America’s Lester Heonig Award. Additionally, she’s received fellowships from the American College of Physicians and the Royal College of Physicians in London.

Dr. Barbara Murphy is the Dean for Strategy and Innovation at the Icahn School of Medicine at Mount Sinai and the Murray M. Rosenberg Professor of Medicine.

Dr. Murphy is a renowned leader in transplant immunology and medicine. Her research focuses on using high throughput genomic technologies to improve understanding of the immune mechanisms that lead to graft injury and loss, and on identifying gene expression profiles and or genetic variants that may be used to predict those at greatest risk.

Dr. Murphy has broken ground in many areas, including research, clinical care delivery, and leadership, and she is both model and mentor for many who hope to make a positive difference to science, medicine, and treatment.

Dr. Murphy is an inventor on multiple patents. As the principal investigator of landmark Genomics of Chronic Renal Allograft Rejection (GoCar) study, she and colleagues were able to use gene expression microarray panel to identify which transplant recipients are at greater risk of developing fibrosis in their allografts. Recently published in The Lancet, this study provides clinicians an opportunity to tailor therapy to prevent loss of kidneys. This work also led to the launch of a biotech company, Verici Dx, that is currently undertaking clinical trials using the panel of genes as a predictor of kidney function in transplant patients.

In addition, Dr. Murphy served as a major figure involved in the initial studies examining the safety of transplanting patients with HIV. Her work and advocacy helped change the transplant community's perspectives regarding transplanting individuals with HIV, while her scholarship and efforts have helped transform care.

Dr. Murphy was one of the first women in the United States to lead a nephrology division, appointed Chief of the Division of Nephrology at Mount Sinai in 2004. In 2013, she was appointed Chair of the Samuel Bronfman Department of Medicine at Mount Sinai (currently out of 134 departments of medicine at medical schools, only 24 women serve as chairs). As chair, she led a department of 13 divisions with nearly 2,000 faculty and advanced scholarship, diversity, inclusion and equity, and fiscal responsibility while building excellence in patient care, research, and education. She also served as Dean for Clinical Integration and Population Health at Mount Sinai.

In the spring of 2020, New York City was the epicenter of COVID-19 infections. As chair of a very large clinical enterprise, Dr. Murphy commanded incredibly effective oversight of multiple hospitals, organized delivery of care during resource shortages, and ensured safety of patients, faculty, staff and trainees. Her work in this area was published in the New England Journal of Medicine.

It is notable that Dr. Murphy was elected to serve as president of two leading professional societies – the American Society of Transplantation and the American Society of Nephrology – the first time in history of these two organizations. She is also an elected member of the American Association of Physicians and has held a variety of other leadership roles in national and international organizations. As a highly respected leader, she has improved patient care and access to health care, and played a central role in extending long-term coverage for immunosuppressive drugs in the United States.