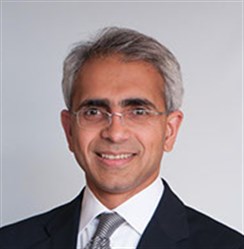 Ravi Thadhani, MD, MPH, is a Professor of Medicine at Harvard Medical School, Chief of the Division of Nephrology at Massachusetts General Hospital, and Executive Director of the Clinical Trials Office at Partners Health Care. He received his Doctor of Medicine degree from the University of Pennsylvania in 1991, and received his Master of Science degree in Public Health in Epidemiology from the Harvard School of Public Health in 1997.

Dr. Thadhani is a clinical and translational investigator and, over the past 16 years, his research laboratory has focused on developing diagnostics and therapeutics related to preeclampsia in addition to understanding vitamin D metabolism. His priority is to have a positive impact on clinical practice and improve outcomes.

Dr. Thadhani and his collaborators have developed novel diagnostic tests for preeclampsia, and are now arduously working on therapies to safely prolong pregnancy in women with very severe preterm preeclampsia. He is actively performing first-in-human randomized trials based on extensive pilot studies (Circulation, 2011 and the Journal of the American Society of Nephrology, 2015). His pregnancy studies center on human research supporting recent findings emerging from basic science collaborations in the area of angiogenic factors and preeclampsia. He has performed pilot and proof-of-concept studies, retrospective and prospective (>10,000 women, >30,000 blood samples) studies, and planned and performed interventional trials. A diagnostic test he and his team developed is currently in the clinic in Europe. He has received several grants, has been invited to speaking events, and contributed to book chapters and publications in this area, including invited commentaries.

Dr. Thadhani has significant experience in research training and has formally supervised and trained 25 post-doctoral fellows, many of whom now occupy faculty research positions at Harvard Medical School and other institutions throughout the world. Many have also secured their own funding from the National Institutes of Health, the American Society of Nephrology, American Heart Association, Juvenile Diabetes Association, and the National Kidney Foundation among other sources. He serves as mentor and advisory committee member of several renal fellows, as well as several post-doctoral fellows.

Dr. Thadhani established his interdisciplinary clinical research laboratory at Massachusetts General Hospital in 1999 which consists of fellows, junior and senior faculty members, a data manager, statisticians, laboratory technicians, nurses, research study coordinators/assistants, and students. The focus of his laboratory has been on translational research, and he has a strong track record of collaborating with basic scientists. The lab conducts observational studies, basic science research, and clinical trials with the goal of finding new diagnostic approaches and therapeutic interventions for patients with kidney disease and related disorders.

Dr. Thadhani has served as a reviewer for and has published in several journals including the New England Journal of Medicine, the Lancet, the Journal of the American Society of Nephrology, Kidney International, and the Journal of Clinical Endocrinology & Metabolism.

Dr. Thadhani has been the recipient of numerous honors and awards including the 2008 American Society of Clinical Investigation, Inducted Member; the 2014 Alumni Award of Merit from the Harvard School of Public Health Alumni Association; the 2015 American Association of Physicians, Inducted Member; and the 2015 Robert W. Schrier Endowed Lectureship from The American Society of Nephrology. His current support includes 7 grants from the NIH as well as private corporations. He is a member of the American Society of Nephrology, American Society of Clinical Investigation, National Kidney Foundation, and the Association of American Physicians. Finally, Dr. Thadhani is a sought-after lecturer and presenter at regional, national, and international venues on topics such as Translational Studies in CKD, Preeclampsia, and Vitamin D.