Non melanoma skin cancer (NMSC) is common after renal transplant. Whether the risk of skin cancer development varies as treatment for ESKD varies is not well described. We evaluated whether this risk is attenuated during periods of graft loss with a return to dialysis.

The National Kidney Transplant Service (NKTS) database was accessed for the years 1994-2015 and all recipients with available data were included in the analysis. This data was linked with the national Irish Cancer Registry (NCRI) to capture episodes of malignancy over follow up. In our analysis we considered end stage kidney disease (ESKD) treatment modality as a time varying covariate and calculated incidence rates, which may fluctuate between transplant and dialysis over follow up. Limitations include: difficulty in capturing the lag between exposure and diagnosis, which may vary by treatment period.

3,672 deceased and living donor adult kidney transplants were assessed comprising 2,310 (62.9%) male and 1,362 (37.1%) female recipients. Periods of treatment with functioning transplant had a higher incidence of skin cancer diagnosis [adjusted incidence rate ratio IRR 2.41 (1.72, 3.38),P<0.001]. Other risk factors for skin cancer included male sex, the number of transplants, and episodes of acute rejection. Tacrolimus was associated with a lower risk compared to cyclosporin however this may be due to a period effect, with longer follow up and ascertainment with ciclosporin. 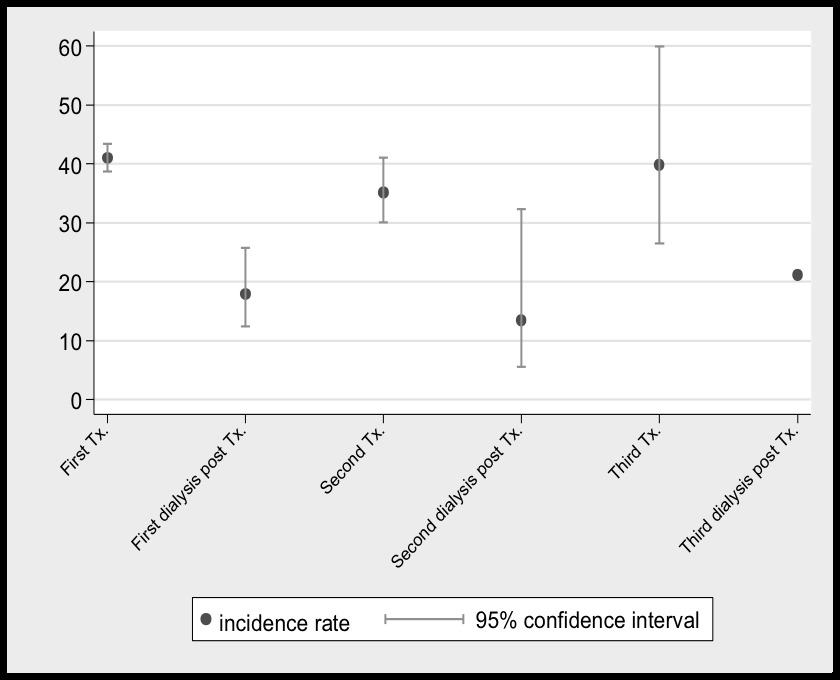