The most popular treatment for SHPT in HD patients is oral administration of cinacalcet in Japan. Nausea and high cost limits its use long term. Etelcalcetide is a novel injectable calcimimetic agent that has a similar mechanism of action as cinacalcet. Direct injection of etelcalcetide into the PTH gland may prove to be cost effective as compared to its systemic administration.

HD patients with SHPT who complained of nausea while on cinacalcet for >2 years were enrolled in this study after their informed consent was obtained. Cinacalcet was withdrawn from all patients for > 2 weeks, and 1.0ml (2.5mg) of etelcalcetid for 1.25ml gland volume was injected under direst real-time ultrasonographic guidance, and serum PTH was determined for up to 8 weeks.

Seven patients (mean age, 68.4±11.8 years old; median HD duration, 12 years; mean PTH 270.6±155.5 pg/ml; participated in the pilot trial. Four achieved >50% reduction in serum PTH up to 4 weeks as shown in figure. Three patients had no response to this therapy, but their PTH was promptly decreased with systemic etelcalcetide administration, suggesting the presence of undetected hyperactive glands by Ultrasound. Direct administration was safe and not associated with any hematoma or laryngeal nerve paresis as has been reported for direct ethanol injection.

Percutaneous etelcalcetide injection into the parathyroid glands appears to be cost effective, safe, and a superior option for the treatment of SHPT in HD patients. 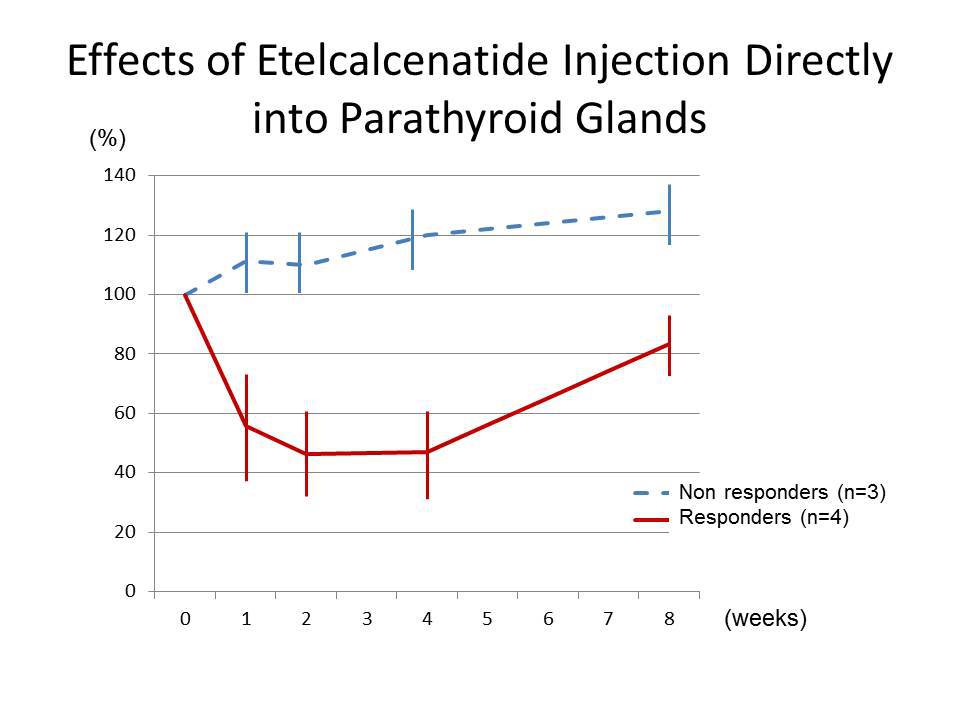