Long-Term Effect of Sparsentan (SPAR), a Dual Angiotensin and Endothelin Receptor Antagonist, on Proteinuria in Patients with Primary FSGS: Interim Analysis of the DUET Trial

Long-Term Effect of Sparsentan (SPAR), a Dual Angiotensin and Endothelin Receptor Antagonist, on Proteinuria in Patients with Primary FSGS: Interim Analysis of the DUET Trial

In the ongoing DUET trial, SPAR (200, 400, 800 mg/day) resulted in greater reduction in proteinuria vs. irbesartan (IRB, 300 mg/day) over the 8-week double-blind (DB) period. Generally, SPAR was safe and well tolerated. After DB, patients were treated in an open-label extension (OLE). We present interim results of OLE for sustainability of the antiproteinuric effect of SPAR.

Results of patients with available Up/C are below. In SPAR:SPAR, SPAR resulted in rapid reduction of Up/C and BP which remained sustained over 48 weeks, while eGFR remained stable. In IRB:SPAR group, transition to SPAR resulted in a significant reduction in Up/C (Week 16), which was sustained until the end of follow-up. In contrast to SPAR:SPAR, IRB:SPAR was associated with mild, temporary, but significant reduction in eGFR, while SPAR-induced BP reduction was less apparent.

SPAR was well tolerated and achieved a sustained antiproteinuric effect in primary FSGS with early BP reduction and stable eGFR over 48 weeks. Transition to SPAR from IRB led to significant, sustained reduction of proteinuria and a temporary, mild reduction in eGFR without long-term impact on BP. 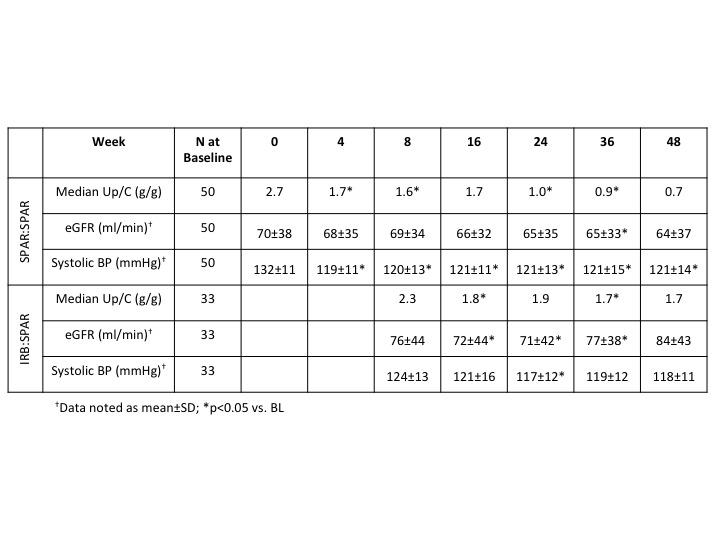