Polyomaviruses commonly infect healthy individuals and remain latent. However, immunosuppression (IMMS) can result in reactivation. With renal tropism BK virus is the most common cause of virus associated nephropathy (VAN) in kidney allografts while JC VAN is a rare complication with only a handful of JC VAN cases reported previously.

From 01/2007 to 12/2014, 3 cases of JC VAN in renal transplant patients were detected at our institution. Here, we report on the variable presentation and histologic findings for JC VAN in these patients.

Two patients had an acute rise in serum creatinine which prompted allograft biopsy (bx), while the other underwent a surveillance bx. The time at bx ranged from 6 to 75 months post-transplant. Only one case displayed viral cytopathic changes, but two showed inflammation and tubulitis. All exhibited polyoma VAN with positive SV40 stains. However, plasma BK viral loads were undetectable, which prompted further testing for JC virus. All subsequently showed JC viremia. Recent acute cellular rejection was seen in two cases, which resulted in intensified IMMS.

JC VAN can present sub-clinically with low/transient viral replication. Presence of viral cytopathic changes is variable, making histologic diagnosis challenging. Previous reports suggest that the onset of JC VAN lagged behind that of BK virus. One of our cases presented early at 6 months post-transplant, arguing that a higher index of suspicion even in those with stable graft function undergoing protocol bx is crucial in capturing this condition. Routine SV40 stains may help catch some cases. Reduction in IMMS remains the mainstay of treatment. Caution with treating accompanying inflammation as rejection activity should be exercised, as intensified IMMS likely contributes to JC VAN. 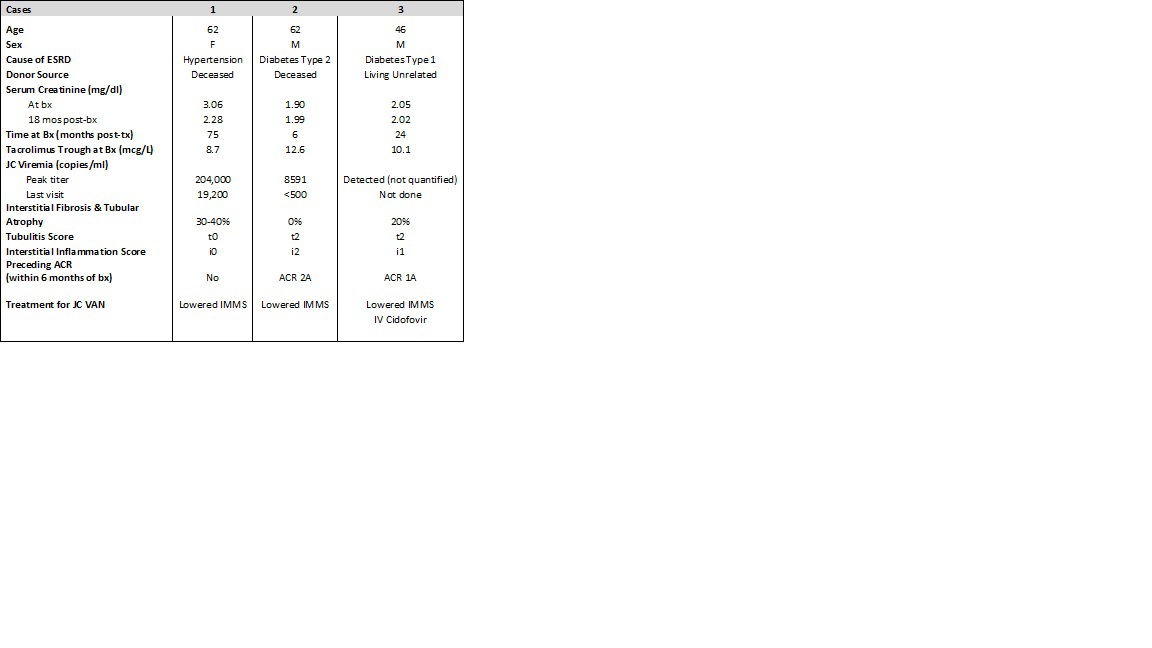