Post-transplant lymphoproliferative disorder (PTLD) is a complication of both solid organ transplant and allogeneic bone marrow or stem cell transplants. PTLD is most often of recipient B cell lineage and is typically associated with Epstein-Barr Virus (EBV) infection.

A 56-year-old AA male with ESRD secondary to hypertension received a kidney transplant from a 9 year-old deceased female donor. Donor and recipient EBV IgG was positive. He received induction with thymoglobulin and maintenance therapy with mycophenylate, tacrolimus, and prednisone. Hospital discharge serum creatinine was 4.9 mg/dl and 1.8 mg/dl on post-op day 15. Allograft biopsy (Figure1), performed on post-op day 48 due to rising creatinine and fever, revealed a massive plasma cell infiltrate which was negative for EBV, but strongly CD138 positive with monotypic lambda light chain expression by in situ hybridization, consistent with PTLD. Recepient EBV IgM and early D antigen were negative posttransplant, and EBV serum PCR was <500. There was no evidence for cellular or vascular rejection. FISH studies revealed a female cell population comprising the plasmacytoid infiltrate. Recipient bone marrow examination was negative for PTLD. Immunosuppression was withheld and treatment was attempted with bortezomib and cyclophosphamide; however, renal function declined and he resumed hemodialysis. Allograft nephrectomy showed diffuse hemorrhagic necrosis of parenchyma with presistent plasma cell infiltrates.

FISH studies performed on the preserved kidney tissue showed a predominant female cell population comprising the atypical plasmacytoid infiltrate, confirming that PTLD was donor derived. There has been no evidence of persistent PTLD in the patient during 10 months of followup. Recipients of other organs from the same donor have not developed PTLD after 10 months of followup. 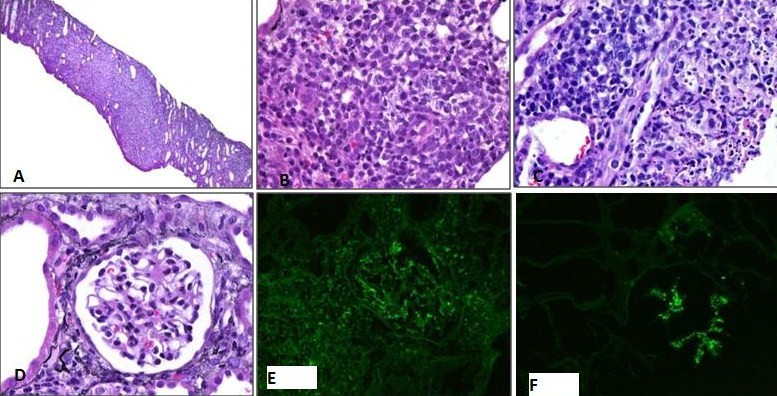