The autoimmune disease Systemic Lupus Erythematosus (SLE) is frequently complicated by co-morbidities such as cardiovascular disease and stroke. The biology of these disease associations are largely unknown but increased understanding may result from transcriptomic analysis of SLE and its co-morbidities.

7 major co-morbidities of SLE were identified for analysis: chronic kidney disease, stroke, cardiovascular disease, osteoporosis, lung cancer, Hodgkin lymphoma,and viral infections. Transcriptomic datasets for these diseases available via the Gene Expression Omnibus were screened and those with over 30 subjects in a case-control design were retained for analysis. Previously described methods were used to explore SLE and the chosen co-morbidities at gene, pathway and disease level (PMID: 27842596). The methods used are statistically robust to the multiple-test corrections required in genome-wide experiments and the combination of results from several independent tests.

36 microarray datasets passed the filter criteria above. These contained expression data from 4,776 individuals (3,320 cases, 1,456 controls). Differentially expressed genes (DEGs) between cases and controls were calculated for each dataset and combined for all datasets per disease (see Figure row A).

Next, enrichment of the DEGs per disease was examined in multiple reference pathways including the Kyoto Encyclopedia of Genes and Genomes (KEGG) (Figure row B). Combining P-values across the 8 studied diseases (Figure row C) delineated pathways that retained statistical significance for dysregulation in SLE and all co-morbidities (Figure Heatmap & blue text).

The significant enrichment of pathway gene sets across SLE and its co-morbidities suggest that these diseases may share an underlying molecular architecture. Further analysis of these data may be able to guide treatment decisions when SLE is complicated by co-morbidities, or delineate gene expression signatures that could prompt focused screening of patients with SLE for relevant co-morbidities. 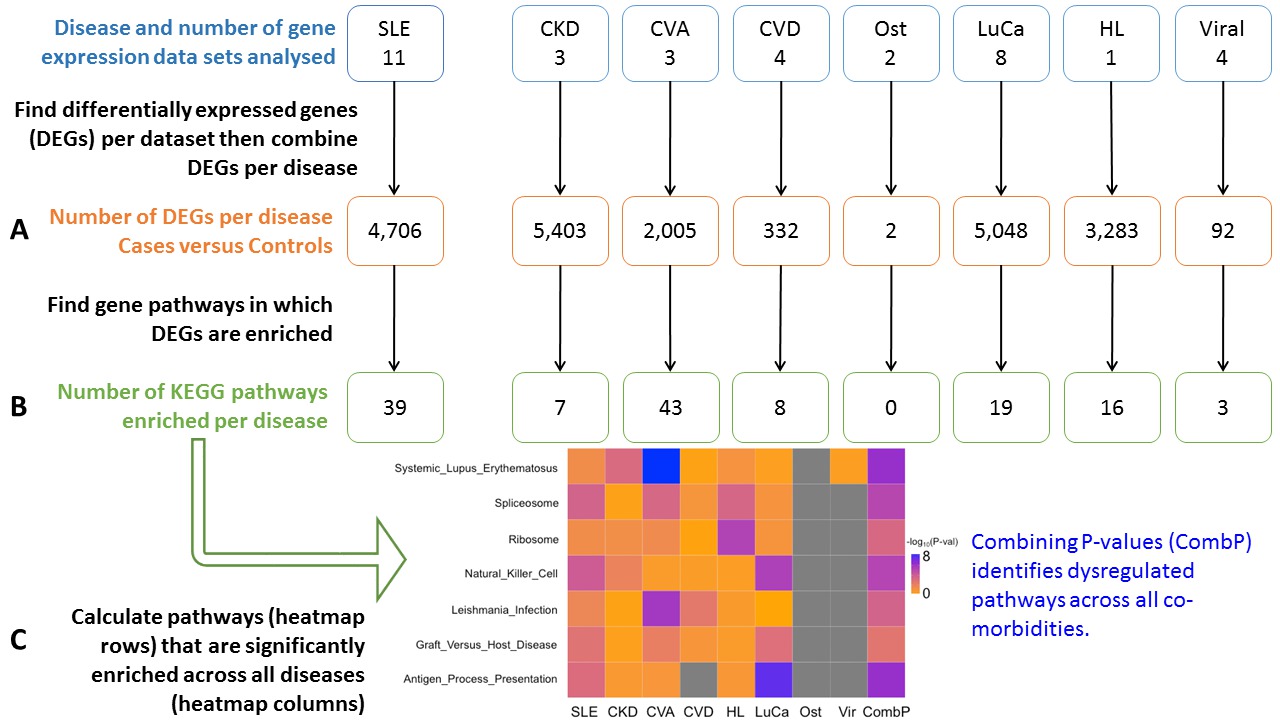