The number of patients with chronic kidney disease (CKD) is on the rise and non-invasive methods of detecting early stages of kidney insufficiency are limited. Rise in creatinine often lags behind loss of kidney function and current ultrasound technology to evaluate severity of CKD hinges on kidney size and echogenicity, which is a subjective marker. Contrast enhanced ultrasound (CEUS) provides qualitative and quantitative measurements of perfusion, which may lead to earlier diagnosis of CKD and provide a better marker of kidney disease progression.

Patients with various stages of CKD were subjected to CEUS of the kidney. Contrast agent (Definity) was infused at a constant rate based on BMI. High mechanical index flash perfusion imaging was captured. Baseline serum creatinine and urinalysis was collected. Time-intensity curves (TICs) were generated for regions of interest (ROI) from the kidney parenchyma, as well as maximum intensity projections and reperfusion maps. TICs are used to generate a wash-in rate, area under the curve, and time-to-peak intensity.

A total of 30 patients with CKD and 3 healthy controls participated in this study. We have found that the enhancement of kidney parenchyma was markedly reduced in patients with lower glomerular filtration rate (GFR) (image 1A). Additionally, we have demonstrated a linear inverse correlation between reperfusion rate and stage of CKD (image 1B). These values will be compared to multiple metrics including GFR and proteinuria in hopes of establishing a novel technique that detects degree of CKD, particularly early stages.

CEUS is a novel, non-invasive imaging modality measuring kidney perfusion, which may be an earlier marker of kidney injury. The generation of wash-in rate, area under the curve, and time-to-peak intensity values will lead to quantitative measurements of kidney function. We are currently working to determine the diagnostic accuracy of these metrics. 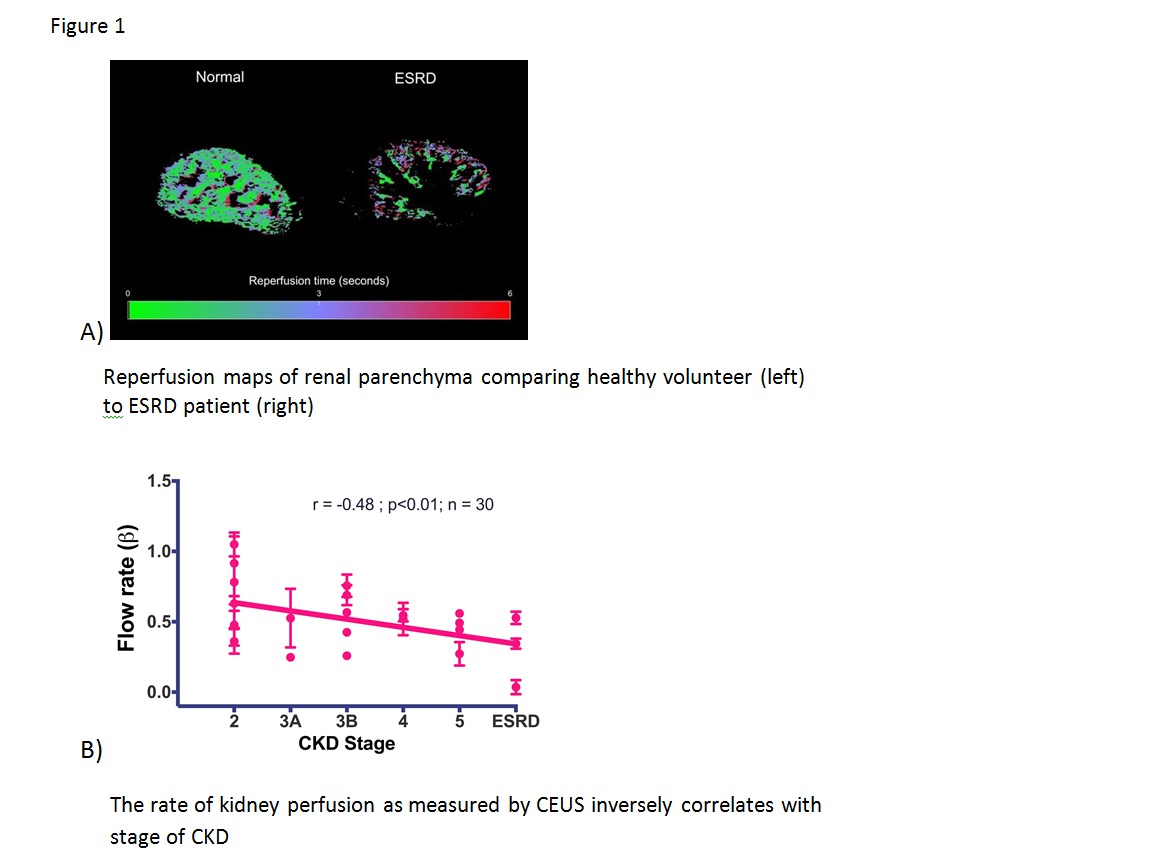