Caffeine has been proposed, based on animal studies, to further progression of autosomal dominant polycystic kidney disease (ADPKD) by increasing cyst and kidney size. ADPKD patients are advised to minimize caffeine intake. We therefore investigated the effect of caffeine on kidney function in ADPKD.

Known risk factors (age, hypertension and genetics) were statistically significant in all adjusted models. While caffeine-by-time was statistically significant in unadjusted and adjusted models (p < 0.01) indicating faster growth in kidney volume using ln(htTKV) as an outcome, total kidney volume remained smaller from baseline (0 years) through 14 years (e.g., p = 0.60 for caffeine vs. none at 14 years). No differences in time to ESRD/death by caffeine were detected (p > 0.12).

We found that caffeine consumption in ADPKD was associated with statistically faster kidney growth. However, our models indicated kidney volume was smaller among caffeine consumers despite the increased rate of growth. This phenomenon persisted over all years modeled. No association with GFR over time was detected. Caffeine does not appear to be associated with larger kidney volumes. 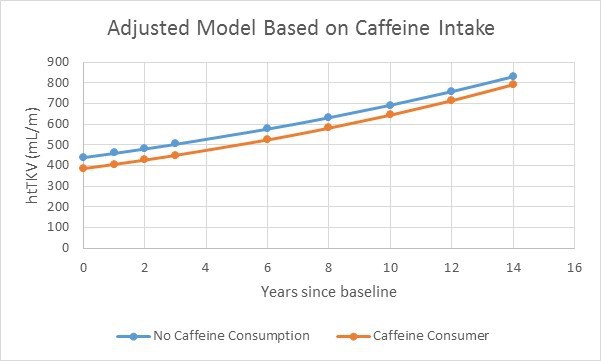