Residual urine volume (RUV) decline after hemodialysis initiation has received limited attention in hemodialysis, and preventive actions are matter of debate. We determined international trends in RUV and analyzed the effect of potentially modifiable predictors on the association between RUV and mortality.

Among n=21,199 patients from 12 countries in DOPPS phases 2-5 (2002-2015), RUV was self-reported as ≥200mL versus <200mL and was measured or estimated in categories (in DOPPS phase 5, 2012-2015). Statistical methods included Cox regression models with adjustment for demographics, vintage, country and comorbidities.

In prevalent patients with median vintage of 3.5 years, 31% reported RUV ≥200mL, at a wide geographical range (19% in Japan to 58% Germany), without a substantial time trend identified over DOPPS phases. RUV ≥200 was reported for 59% of patients on dialysis less than 1 year, decreasing to 45%, 36% and 17% of patients on dialysis 1-1.9 years, 2-2.9 years, and 3+ years, respectively. Prevalent patients who reported RUV <200mL had higher adjusted mortality than patients with RUV ≥200mL. In line, higher RUV was predictive of better survival in a dose-dependent fashion (Figure). The mortality risk associated with RUV did not differ among patients who were prescribed (versus not prescribed) diuretics (p-value for interaction =0.32).

Maintenance of RUV differs by region and vintage, but has remained relatively stable in the DOPPS since 2002. The fact that >17% of patients on dialysis at 2 and 3 years have RUV may previously have been underrecognized. Our survival model among prevalent patients confirms the dose-dependent importance of RUV as a predictor of survival. Although diuretics did not modify RUV-associated mortality risk, high-dose diuretics and other means to potentially preserve RUV deserve more focused investigation. 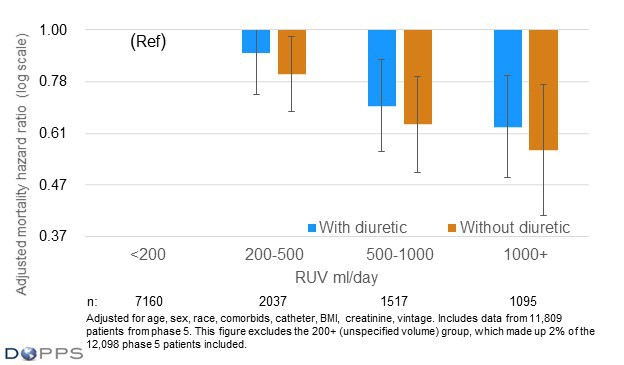