Differences between Home and In-Center BP Readings in Dialysis Patients

Differences between Home and In-Center BP Readings in Dialysis Patients

Critics argue that ‘in-center’ pre-dialysis BP readings in hemodialysis patients are not reflective of ‘true BP’ because patients are at the extremes of fluid balance, are more anxious than usual and staff do not follow AHA guidelines for measurement. Few studies have compared home with in-center readings, and those that have, have been limited to 1-2 weeks of home readings. The BID was a pilot RCT in which 126 thrice weekly hemodialysis patients were randomized to 12 months of treatment to a pre-dialysis standardized dialysis unit (SDU) systolic blood pressure (BP) 110-140 or 155-165 mm Hg. Patients measured BP at home on the day following the mid-week treatment for one year.

The difference between the mid-week pre-dialysis SDU and home systolic BP the next morning was modeled using linear mixed regression with cubic splines.

Systolic BP at home was a mean (SD) 6.1 (0.7) mm Hg lower than the pre-dialysis SDU (Figure 1) though, the range of the difference was wide and for 25% of the population, home was less than SDU by more than 15 mm Hg. The ‘within patient’ variability in systolic BP was slightly higher for home (16.9 mm Hg) as compared with.pre-dialysis SDU (14.3) readings. Results were not different when SDU was compared with the average of the morning and evening home BPs.

The average difference between systolic BP taken pre-dialysis using a standardized protocol vs. at home of ~6 mm Hg is surprisingly consistent with the difference between office and home BP in the general population. However, for some patients, it is much larger, and the differences are likely to be even greater with routine (as opposed to standardized) in-center BP measurement. Obtaining home BP readings in dialysis patients may reduce 'overtreating' hypertension, which would be especially important in elderly patients and those prone to falls. 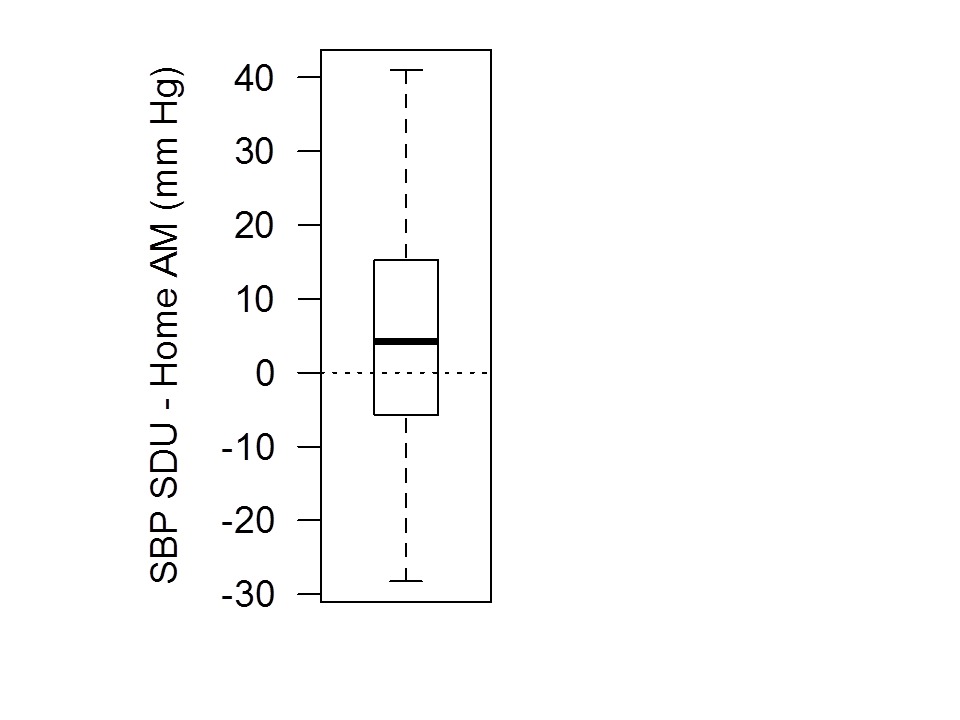