Self-Reported Sleep Problems and Mortality among US Adults with and without CKD: NHANES 2007-2010

Self-Reported Sleep Problems and Mortality among US Adults with and without CKD: NHANES 2007-2010

Sleep problems are associated with several medical conditions including kidney disease. However, little research has been done assessing associations of sleep problems with mortality. We estimated the effects of self-reported sleep problems on mortality, by CKD status, among nationally representative, US adults.

A sample of 11,338 adults, ages 20+, from the mortality-linked National Health and Nutrition Examination Survey (NHANES; 2007-2010) with complete data on estimated glomerular filtration rate (eGFR) and urine albumin-to-creatinine ratio (UACR) were included in the analysis. Data on self-reported sleep problems were obtained from questionnaires. CKD was defined as eGFR < 60 ml/min/1.73 m2 or UACR > 30 mg/g. Cox regression, stratified by CKD status, was used to estimate hazard ratios (HR; 95% CIs) for mortality over a median of 34 months of follow-up, adjusting for survey year, age, sex, and race/ethnicity. A combined model including all the subjects was investigated (not shown) to test for differences in associations by CKD status.

Self-reported sleep problems were common among participants with CKD. Among individuals with CKD, 4 of the 5 sleep problems were positively associated with mortality, adjusting for demographic factors (table). For diagnosed sleep disorders and <6 hours sleep per night, these associations in CKD patients were stronger than in persons without CKD (though both p-values for interaction were >0.15). Nocturia and >9 hours of sleep were associated with mortality in patients with and without CKD.

If these findings are replicated in other studies with more extensive control for confounders, especially among CKD patients, efforts should be made to understand if ameliorating sleep problems improves wellbeing and survival. 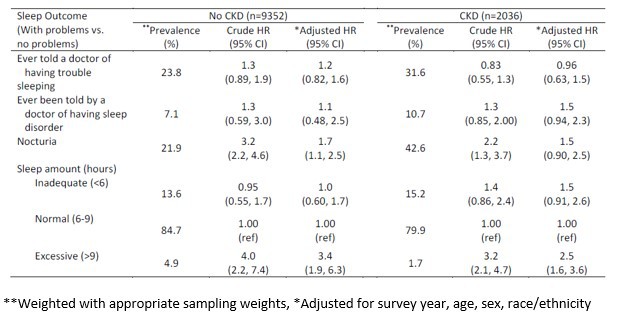