Mammalian forkhead members of the class O (FoxO) transcription factor are implicated in the regulation of oxidative stress, and FoxO proteins are negatively regulated by the phosphatidylinositol 3-kinase (PI3K)–AKT signaling pathway. We examined the effect of Klotho on PI3K/AKT pathway and manganese superoxide dismutase (MnSOD) in tacrolimus (Tac)-induced oxidative stress.

Mice were treated with Tac (1.5 mg/kg, subcutaneously) and recombinant Klotho (rKlotho, shedding form, 10 ug/kg once every 2 days, IP injection) for 4 weeks. For in vitro study, HK-2 cells were seeded in culture plates and treated with Tac (60 ug/mL) and rKlotho (1 ug/mL) with or without LY294003 (25 uM) for 12 h. We examined whether the oxidative stress and signaling pathway are involved in the protection by Klotho using immunoblot, immunostaining, RT-PCR, ChIP assay, oxygen consumption, ect. 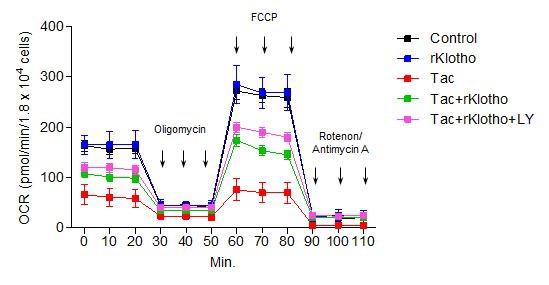