Association of Gender with the Utilization of Peritoneal Dialysis

Association of Gender with the Utilization of Peritoneal Dialysis

Peritoneal dialysis (PD) is underutilized in the United States compared to other countries. We analyzed data from the USRDS and US census to assess the association between gender and initial dialysis modality to determine whether gender might impact PD utilization. We also investigated gender-specific associations of age, race/ethnicity, median household income and employment status on the incidence of PD.

We estimated the proportion of USRDS patients utilizing PD as their initial modality between 2000-2014, adjusting estimates to the mean value of all covariates (age, race, ethnicity, cause of ESRD, comorbidities, incidence year, income and employment status) and compared these estimates for women and men.

Our results indicate that women in the US were more likely than men to utilize PD as their initial modality, but this association varies with age. This study emphasizes the role gender may play in medical decision making and highlights the need to further investigate the factors that influence patients of each gender to choose PD.

Table 1. Gender, race, income and employment influence the likelihood on being on PD. 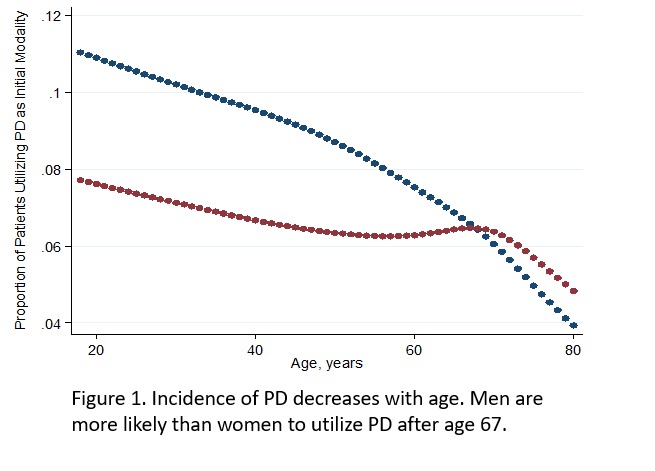