Past research suggested a significant lag between onset of hypertension (HTN) and initiation of antihypertensive therapy (AHRx). The aim of this study was to evaluate the time to initiation of AHRx in patients with proteinuric kidney disease identified as hypertensive based on standard guidelines.

Longitudinal outpatient blood pressure (BP) measurements were available on 858 patients, 71% adults and 29% children, in the NephCure Accelerating Cures Institute cohort. Patients were defined as hypertensive either by ICD9/ICD10 diagnosis code or having 3 or more elevated BPs in a 6-month period. Patients already on AHRx at first observation were excluded. Kaplan-Meier and cox-proportional hazards analyses were used to evaluate the time to initiation of AHRx.

Of the 858 patients available, 482 had evidence of HTN. 195 of these patients were excluded due to prior AHRx. Of the 287 remaining patients, 234 (82%) were subsequently started on AHRx. The median time from diagnosis or third qualifying BP until therapy initiation was 92 days (IQR=1 to 535). Adults were more likely to receive AHrx than children (87% vs 60%, p=0.04). Patients with Membranous Nephropathy had a shorter time to therapy initiation than those with other diagnoses (Figure). Patients with HTN by coded diagnosis were more likely to receive therapy compared to those with HTN by BP readings alone (83% vs 33%, p=0.03).

Patients with HTN in the setting of primary proteinuric kidney disease are prescribed AHRx a median of 3 months after HTN diagnosis. Having a coded diagnosis of HTN increased the likelihood of AHRx. Overall only 11% of the proteinuric patients in the NACI patient registry have HTN without the benefit of AHRx. 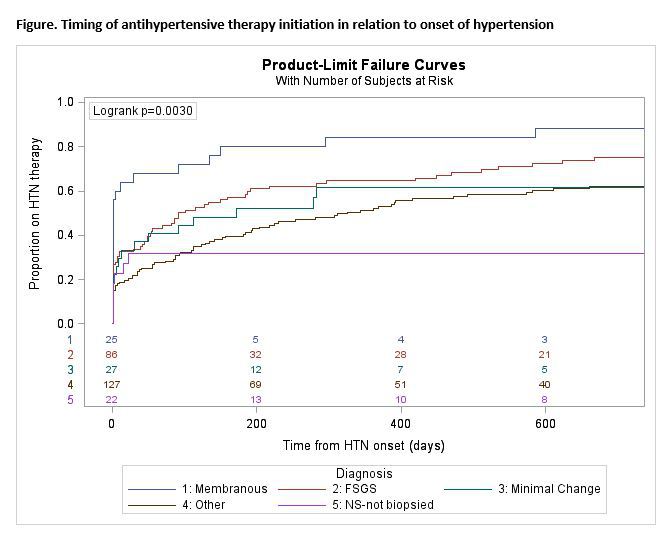