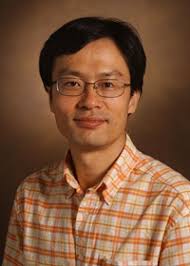 Both EGFR and the Hippo signaling pathway are implicated in cell proliferation and differentiation. Our previous studies have shown that activation of EGFR in renal proximal tubule epithelial cells (RPTC) plays a critical role in functional and structural recovery from Ischemia-reperfusion injury (IRI). YAP and TAZ, two key downstream effectors of Hippo pathway, are activators for multiple gene transcriptional factors in the nucleus. The goal of these studies was to determine whether YAP and/or TAZ play a role in mediating EGFR’s effects in AKI.

Deletion of EGFR specifically in RPTC or administration of an EGFR tyrosine kinase inhibitor, Erlotinib, markedly inhibited YAP expression and nuclear translocation and the YAP downstream target gene, amphiregulin, in response to IRI. Deletion in renal proximal tubule of both Yap and Taz but not Taz alone delayed renal recovery from IRI. BUN remained elevated in Yap/TazI-ptDKO mice at day 7 (64 ± 2.5 mg/dl, n=3, P<0.05), while decreasing to 39 ± 3.8 mg/dl or 32 ± 2.5 mg/dl in the TazI-ptKO mice or the WT mice after IRI. Upregulation of amphiregulin and cyclin D and phosphorylation of retinoblastoma protein (Rb) in response to IRI were inhibited in EgfrptKO and the Yap/TazI-ptDKO mice. Exposure of the hRPTC to hypoxia followed by reoxygenation increased YAP nuclear translocation, amphiregulin expression, cyclin D expression and Rb phosphorylation, which were inhibited by an EGFR tyrosine kinase or PI3K inhibitor treatments or transfection of EGFR, AKT1 or YAP specific siRNAs.