Hemodialysis(HD) has limited efficiency on protein-bound uremic toxins(PBUTs) removal due to their high albumin binding.Binding competitors to PBUTs(“displacers”) such as ibuprofen(IBF) can increase the free concentration of PBUTs and enhance dialytic removal.We investigated if infusion of IBF improves the dialytic removal of p-cresyl sulfate(pCS) and indoxyl sulfate(IS)

Chronic HD patients(National Institute of Cardiology, Mexico City) were studied during a mid-week HD on their standard prescriptions(Qb300 mL/min;Qd500 mL/min).IBF(800 mg) was infused at a constant rate into the arterial line,from 20 to 40 minutes into the treatment.Dialysate levels of IS, pCS, IBF, tryptophan(TRP) were measured by HPLC. Concentration data were normalized to the respective patient mean levels, which are reported as mean±SD and were compared before, during and after IBF infusion

Seventeen patients were included(10 females,mean age 36±11 years;HD vintage 24 (3-111) months).IBF infusion was well tolerated.Mean of relative levels in the dialysate outlet before, during and after IBF infusion were 0.67±0.23,1.42±0.14, and 0.61±0.19 for IS, 0.63±0.24,1.42±0.15, and 0.64±0.19 for pCS, respectively, indicating a marked increase of dialytic PBUT removal during IBF infusion.Creatinine and urea, non-protein bound control solutes, continued to decline during the IBF infusion, while TRP, a moderately protein bound molecule, increased non-significantly(Fig.1)

This first-in-man study shows that IBF as a displacer during HD significantly enhanced the dialytic removal of PBUTs.These results should stimulate the search for safe and effective molecules that may be used as displacers during HD 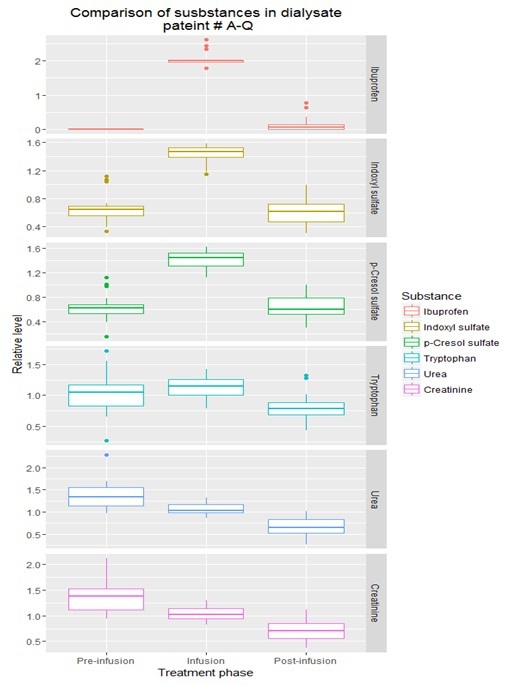