Electronic health record derived NephCure Accelerating Cures Institute cohort data were used. Patients with primary proteinuric kidney disease and onset of sustained proteinuria, defined as two or more days within 6 months with measurements of UP:C>1 or dipstick proteinuria ≥2+, were eligible. Kaplan-Meier analysis was used to evaluate the time to initiation of RAAS blockade from the date of the second qualifying proteinuria measurement.

Of 848 registry patients, 147 patients were excluded due to prior RAAS therapy and 496 due to intermittent proteinuria. 205 patients were eligible for this analysis. 89 (43%) patients were prescribed RAAS blockade, 64 of 110 adults and 25 of 95 children. The median time from onset of sustained proteinuria until initiation of RAAS blockade was 241 days (IQR 35 to 653). Patients with Focal Segmental Glomerulosclerosis (FSGS) or Membranous Nephropathy (MN) were more likely to receive RAAS blockade and receive it earlier than Minimal Change or NS-not biopsied patients (Figure). In a multivariable Cox-proportional hazards model, diagnosis but not age or sex, was a significant factor associated with time to initiation of therapy.

Following onset of sustained proteinuria, RAAS blockade was initiated within a median of 8 months. Patients with a diagnosis of FSGS or MN were more likely to be treated and to be treated earlier. This study highlights opportunities for improvements in health care delivery. 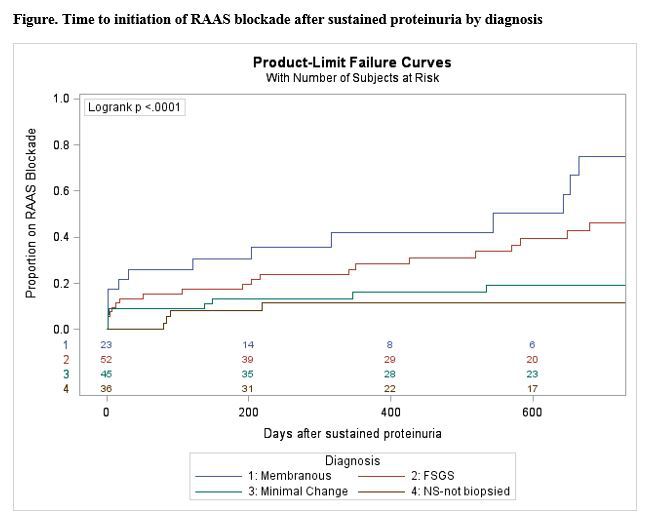