Unusual Cause of Visceral Infarcts

Unusual Cause of Visceral Infarcts

Thrombosis is an increasingly recognized feature of ANCA vasculitis

Venous (DVT, PE) and arterial thrombosis are being increasingly recognized in GPA, although arterial involvement has predominantly been described in the coronaries. This predisposition to thrombosis is multifactorial: 1) Activation of neutrophils by antibodies and the interaction of activated neutrophils with the endothelium. There is also release of tissue factor which activates thrombosis. 2) Elevated thrombomodulin levels activate thrombosis and inhibition of conversion of plasminogen to plasmin inhibits fibrinolysis. There are no recommendations on use of anti-platelets or anti-coagulants at present. 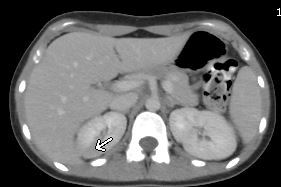