A 44 year old male with history of ESRD on hemodialysis (HD) was admitted for presumed tunneled HD catheter infection. Over 2 days, the patient grew pseudomonas aeruginosa at the exit site and received piperacilin-tazobactam, vancomycin and eventually cefepime followed by catheter removal. Prior to the first treatment of heparin freeHD (Optiflux 180) on the 1/27/2017 the platelets were 235x103/µL. The day after platelets drop 107x103/µL. Prior the second HD session (Optiflux 180) was on 1/31/2017, the serum platelets were 187x103/µL. The day after HD, the serum platelets dropped to 85x103/µL. A presumption of heparin induced antibody was made due to prior use of heparin for deep venous thrombosis prophylaxis and argatroban drip was commenced. Serum heparin induced thrombocytopenia antibodies and serotonin release assay were negative and argotroban was discontinued. Patient was having hemodialysis in the hospital with a dialyzer Polysulfone based (Optiflux 180). Assuming the thrombocytopenia was related to the polysulfone dialyzer given the see-saw effect noted pre and post dialysis (Figure), dialysis was changed to a cellulose base dialyzer (Exeltra 210). Thrombocytopenia resolved as a result of this switch. Following this, the platelets remained to improved and continued in the normal range.

There have been rare reports of thrombocytopenia associated with dialyzer membranes. As per literature review one of the causes for thrombocytopenic effect of the polysulfone dialyzers is the use of electron beam sterilization. The electron beam modifies the property of polysulfone membranes, increasing their hydrophilicity. Given only monthly blood draws, this entity might not be evident or perhaps, overlooked in the outpatient ESRD units. Our case highlights an important under-recognized cause of asymptomatic thrombocytopenia in the HD patient. 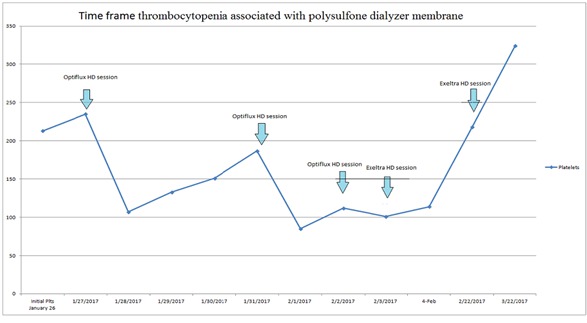