Is Urea Effective in the Management of Oxcarbazepine-Induced Hyponatremia?

Is Urea Effective in the Management of Oxcarbazepine-Induced Hyponatremia?

Oxcarbazepine and carbamazepine, anticonvulsants used to manage partial seizures, are a known cause of hyponatremia largely due to increased tubular sensitivity to ADH. Common ways of addressing this include fluid restriction and sodium chloride (NaCl) supplementation. These can increase the risk of developing nephrocalcinosis/nephrolithiasis in medically complex patients with epilepsy who are largely sedentary. As an alternative, we sought to determine if urea, by osmotic increase in free water excretion, was effective in safely correcting hyponatremia. We present 4 patients whose hyponatremia resolved with the use of urea in place of NaCl.

The patients, ages 6 to 17 years, were found to have hyponatremia with a nadir between 122 and 131(Figure 1 shows median values) after starting oxcarbazepine. Despite supplementation with NaCl (1-4mEq/kg/day) with some doing fluid restriction; sodium levels remained in the low 130s. The patients were then started on enteral urea (g-tube, j-tube or orally) at 15g to 30g (250-500 mosm) daily . Serum sodium levels normalized within 1-2 weeks of starting urea. Three of the four patients have been successfully weaned off NaCl supplementation with plans to wean the fourth as well.

Our results show that urea is effective in treating oxcarbazepine-induced hyponatremia. It works to increase urine osmolarity and the excretion of electrolyte-free water. It has been suggested in an animal model to also have neuroprotective effects minimizing risk of osmotic demyelination resulting from rapid correction of chronic hyponatremia. Urea does not potentiate the formation of stones, and as it allows for an electrolyte free-water diuresis it may enable less fluid restriction, help reduce urinary solute concentration and increase urine flow, thereby contributing to stone prevention. It is easy to administer, is not nephrotoxic and can be obtained from retail pharmacies. Given these results, urea may also be a useful alternative for symptomatic hyponatremia in place of hypertonic saline or vaptans. 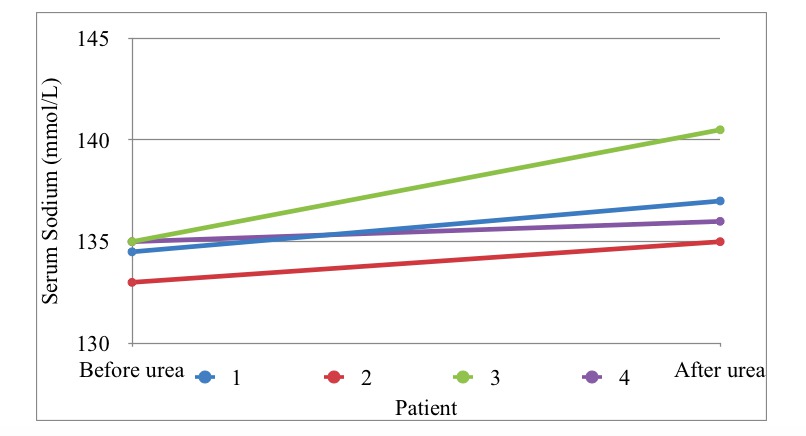