MRI Modeling of Arteriovenous Fistula (AVF) Stenosis in a Pig Model: Creating a Test Bed for Mechanistic and Therapeutic Innovation

MRI Modeling of Arteriovenous Fistula (AVF) Stenosis in a Pig Model: Creating a Test Bed for Mechanistic and Therapeutic Innovation

Arteriovenous fistula (AVF) stenosis (resulting in the use dialysis catheters) is an important cause of morbidity and mortality in hemodialysis patients. We have previously described a pig model of AVF stenosis. We now describe the use of MRI imaging in this model to enhance its capabilities for mechanistic and therapeutic innovation.

AVFs were created in the groin in 6 male Yorkshire Cross pigs. Black blood contrast-free MRIs were performed at days 28 and 56 (Figure A). MIMICS software was used for segmentation and 3D processing. 3-D reconstructions were analyzed along the first 35 mm of the venous segment. Centerline software was used to identify regions of maximal and minimal stenosis and to create a model for average stenosis, using cross sectional images at 5mm intervals (Figure B). Flow data was collected and is currently being analyzed.

The use of sophisticated 3D MRI technology to obtain standardized end points for AVF stenosis (both anatomy and flow) significantly reduces the subjectivity associated with the evaluation of novel therapies in this test bed. We hope that the use of these sophisticated technologies in a reproducible and validated large animal model, will incentivize much needed innovation in this area, both at a mechanistic and therapeutic level. 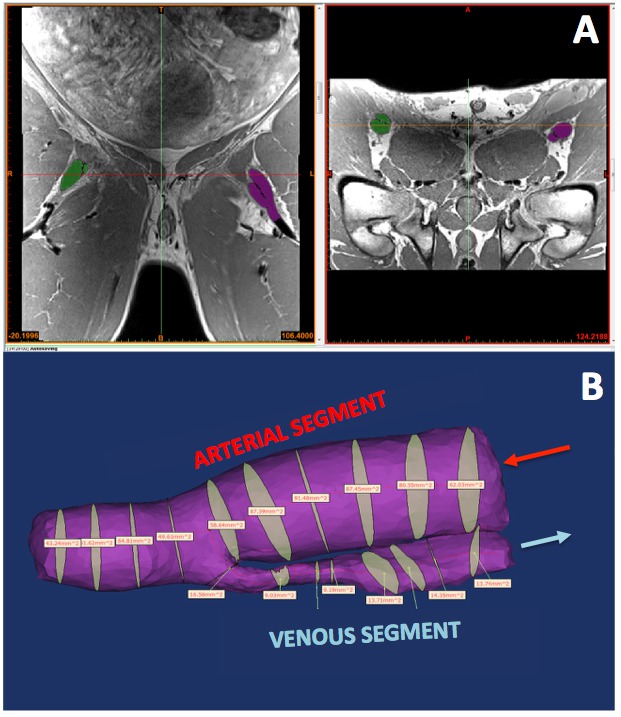