Race and Post-Hospitalization Mortality in AKI

Race and Post-Hospitalization Mortality in AKI

Acute Kidney Injury (AKI) , like ESRD, is known to be associated with increased mortality. Racial differences in outcomes exist in patients with multiple medical conditions and “access to care” is one of the linked variables. This study aims to determine if racial differences in mortality exists after hospital discharge for AKI when access to care may be inconsistent.

Retrospective cohort study of adults admitted to the University of Virginia Medical Center between January 1, 2001 and December 31, 2015 who had AKI during hospitalization. AKI definition of > 0.3 mg/dl rise in serum creatinine, SCr, within 48 hours was used (Kidney Disease Improving Global Outcomes, KDIGO).
Patients' characteristics or risk factors were summarized as frequencies and percentages for categorical variables and as mean ± standard deviation for continuous variables. The associations of these factors with the outcome of 90-day mortality post hospitalization were evaluated in logistic regression, measured by odds ratios (ORs) for the likelihood of post-hospitalization mortality. The 95% confidence intervals (CIs) for ORs and the corresponding p-values are reported. A p-value < 0.05 was considered to be statistically significant.

Black patients with AKI had lower post-hospitalization 90-day mortality. This outcome is similar to that seen in black patients treated for ESRD in USA. A better understanding of mechanisms underlying a possible survival advantage in black Americans with AKI needs further investigation. 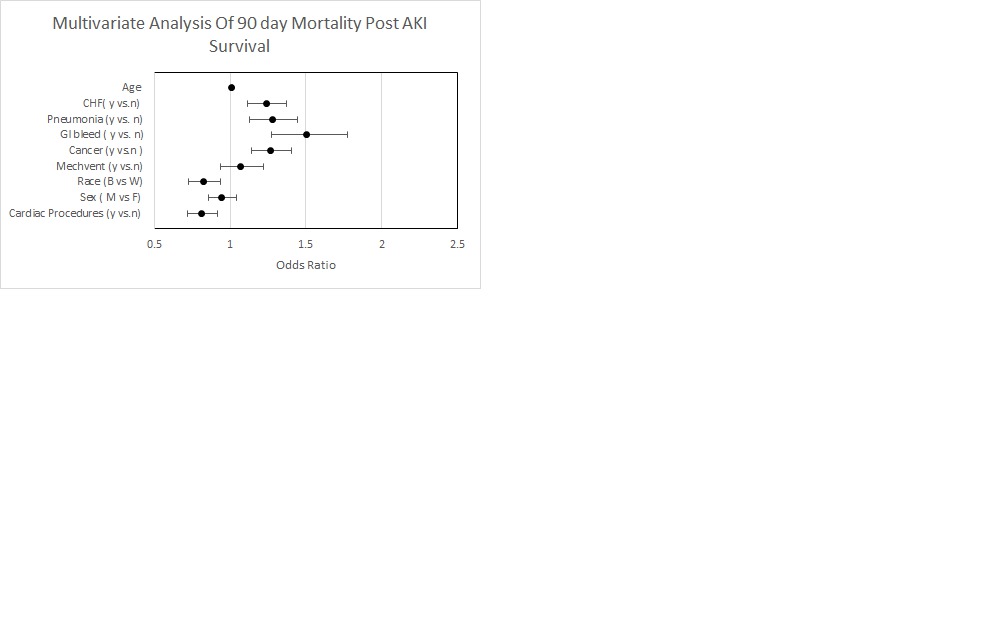