The obese Zucker fatty/spontaneously hypertensive heart failure F1 hybrid (ZSF1) rat has been proposed as a viable animal model to study the metabolic cardiorenal syndrome as these rats spontaneously develop diastolic heart failure and chronic kidney disease in the presence of obesity, hyperglycemia and hypertension. Risk factors associated with the metabolic syndrome correlate strongly with salt-sensitivity of blood pressure. We investigated the interaction of obesity and sex on salt-sensitivity in obese and lean ZSF1 rats. We hypothesized that obesity and male sex would both promote salt-sensitive hypertension.

Male and female ZSF1 rats, lean as well as obese (n=6/subgroup), were either implanted with a deoxycorticosterone acetate (DOCA) pellet and fed a high salt diet (6% NaCl) or a placebo pellet and fed a normal salt diet from 19 weeks of age. Every two weeks, from 18 (i.e. prior to pellet implantation) to 26 weeks of age, systolic blood pressure (SBP, tail-cuff) and 24-hour natriuresis were measured.

SBP was higher in both obese compared to lean DOCA+6% salt groups (p<0.0001). Natriuresis was higher in male obese vs. lean DOCA +6% salt groups (p<0.05). The SBP response to high salt intake occurred in a stepwise manner in all four DOCA+6% salt groups (with constant SBP from 22 to 24 weeks). Comparison of slopes of the natriuresis-pressure relations using 18 and 26-week data (figure) showed differences between male obese and lean (p=0.01) and female obese and lean (p=0.02) ZSF1 rats, suggesting that obesity promotes salt-sensitivity. Additionally, the slopes between obese males and females differed (p=0.02) suggesting that salt-sensitivity was most marked in female obese ZSF1 rats.

Our results in ZSF1 rats indicate i) a phased blood pressure response to high salt intake, ii) an adverse effect of obesity on salt-sensitivity, and iii) a further increased salt-sensitivity in obese females vs. obese males. 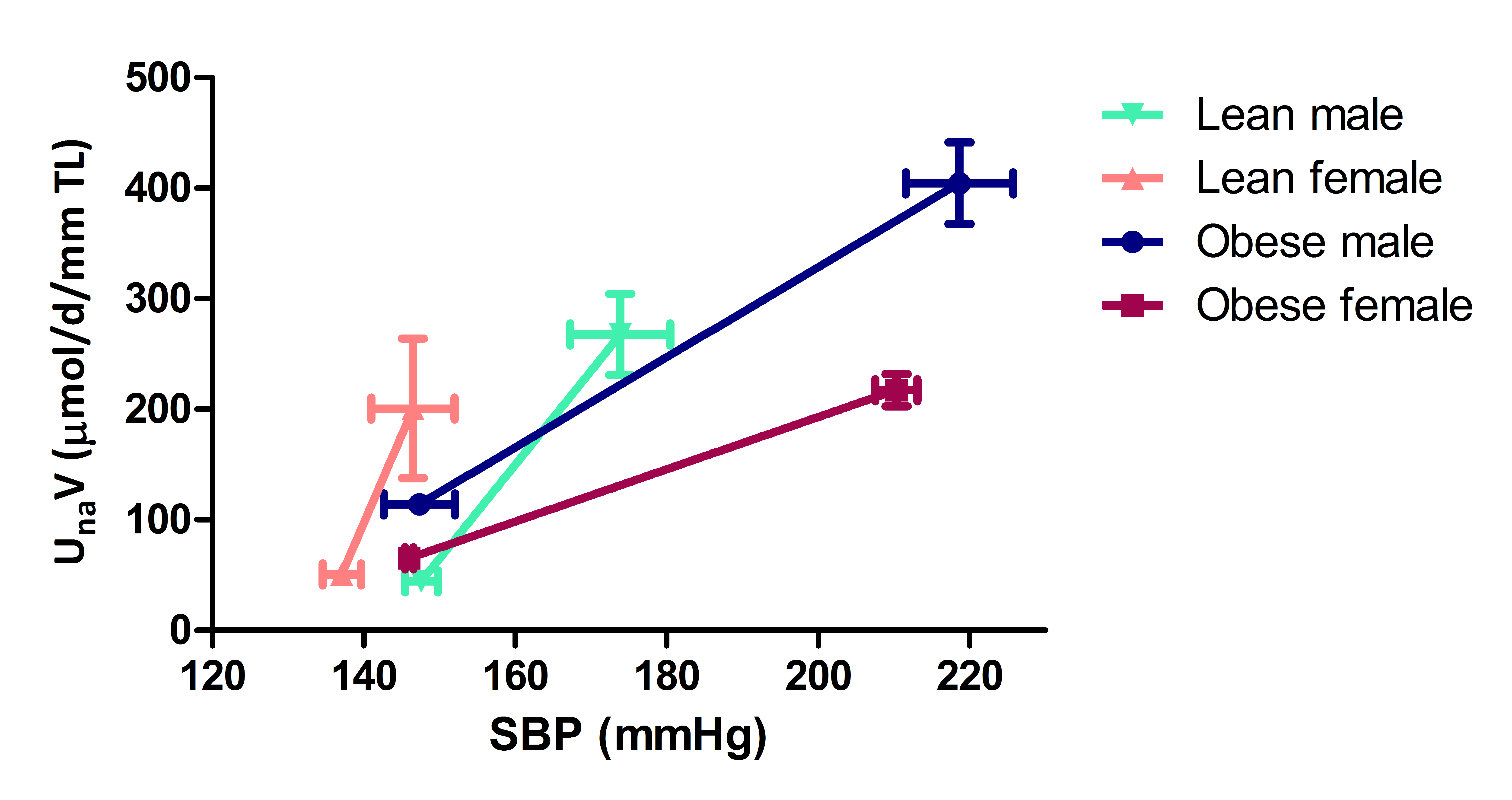