Biopsies taken at the time of deceased donor kidney procurement are frequently used to assess organ quality and are cited as a leading reason for discard. However, the reproducibility and prognostic capability of these biopsies are controversial.

We compiled a retrospective, single institution, continuous cohort of deceased donor kidney transplants with complete biopsy reads from 2006-2009 (n=301). Histology was classified as optimal if glomerulosclerosis and interstitial fibrosis/tubular atrophy were each ≤10%, and vascular disease was mild or none. Cox proportional hazards and Kaplan-Meier methods were used for time to event analysis.

The reproducibility of procurement biopsies was poor: in the 119 kidneys that were biopsied twice, 44.5% had histologic category (optimal vs. suboptimal) discrepancies comparing the first and second biopsies (κ=0.11, p=0.11). Using the frozen section biopsy nearest the time of procurement, graft survival was worse for kidneys with suboptimal vs.optimal histology (HR 1.91, p=0.004) (figure 1). This discriminatory ability of procurement biopsies to predict graft failure was stronger when they were obtained and read in our local OPO (p=0.04) compared to the donor OPO (p=0.18). Regardless of histologic category, transplantation was associated with a significant survival advantage compared to remaining on dialysis (5-year overall patient survival 87.1% [optimal] vs. 83.4% [suboptimal] vs. 35% [dialysis]).

Frozen section procurement kidney biopsies are poorly reproducible, but may help determine long term allograft function. However, even DDRT kidneys with suboptimal histology will result in a significant survival advantage compared to dialysis suggesting that biopsy findings alone should not be used to discard an organ. 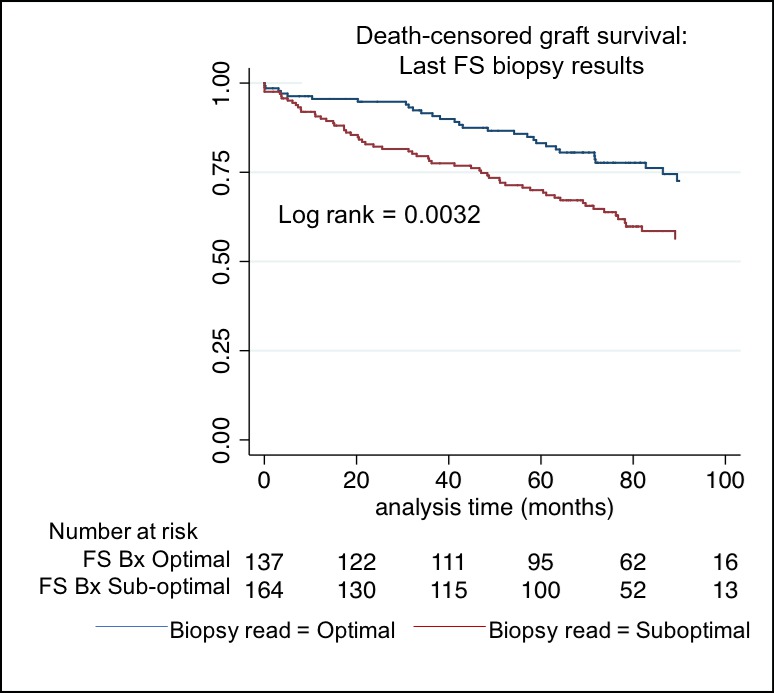