Innate inflammation after reperfusion of ischemic organ has a significant role in ischemic acute kidney injury (AKI). In prior studies, we showed that natural IgM anti-leucocyte autoantibodies (IgM-ALA) inhibit inflammation. Here we show that pan-B cells are switched to regulatory cells when pretreated ex-vivo with either IgM or CpG.

C57BL/6 mice were i.v. infused with 0.5X10^6 B cells that were cultured for 48h with either IgM or CpG and 24h later these mice underwent bilateral renal ischemia. Plasma creatinine and other studies were preformed 24h after ischemia.

Pre-treatment with regulatory pan-B cells (IgM or CpG treated) protected kidneys from AKI via regulation of in-vivo NKT-1 cells which amplify the innate inflammatory response to DAMPS released after ischemia. Such ex-vivo induced regulatory pan-B cells express low CD1d and inhibit inflammation by regulating in-vivo NKT-1 in the context of low lipid antigen presentation and by a mechanism that involves either PDL1. CpG induced regulatory B cells, but not IgM induced regulatory B cells, also require IL10 for their regulatory activity. LPS, unlike CpG, fails to down-regulate CD1d and switch pan-B to regulatory cells that inhibit ischemia induced AKI despite increased IL10 production.

Ex-vivo induced regulatory pan-B cells could have therapeutic relevance as these easily available cells can be pre-emptively infused to prevent AKI that can occur during open heart surgery or in transplant recipients receiving deceased donor organs. 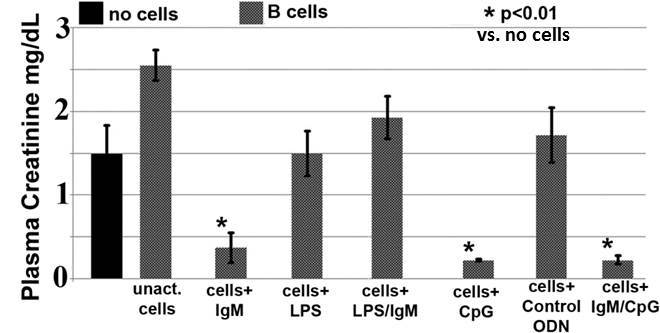