Association of Kidney Function Decline with Survival in Primary Myelofibrosis

Association of Kidney Function Decline with Survival in Primary Myelofibrosis

Primarymyelofibrosis (PMF) is a type of myeloproliferative neoplasm which causes megakaryocyte and granulocyte proliferation in bone marrow leading to fibrous tissue deposition and extramedullary hematopoiesis. Renal involment in PMF is rare however acute kidney injury may develop during the disease course due to thrombosis of the renal vessels, occlusion of the urinary tract by blood clots or megacaryocyte infiltration of the kidney interstitium. PMF is a rare disease, and the impact of kidney function on survival has not been studied well.

We retrospectively evaluated 107 patients with PMF treated with Ruxolitinib between 2007 and 2015. The mean follow-up was 51.2 months (95% CI: 43.4, 66.7). Patient characteristics are summarized in Table 1. Seventy-six percent (n=81) of patients were dead at the time of analysis. Multivariate logistic regression model was used to assess predictors of treatment response, and dynamic prediction model was used for modeling associations with survival.

We observed that estimated glomerular filtration rate (eGFR) was strongly associated with the risk of overall survival. Halving of eGFR levels resulted in 1.4-fold (95% CI: 1.06-1.78, p=0.042) increase of risk. No significant associations were observed between eGFR and clinical response including spleen response. 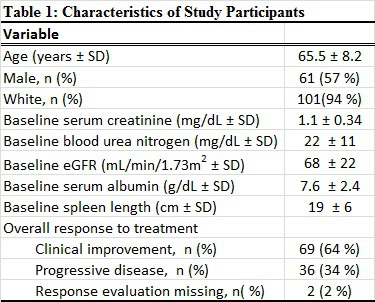 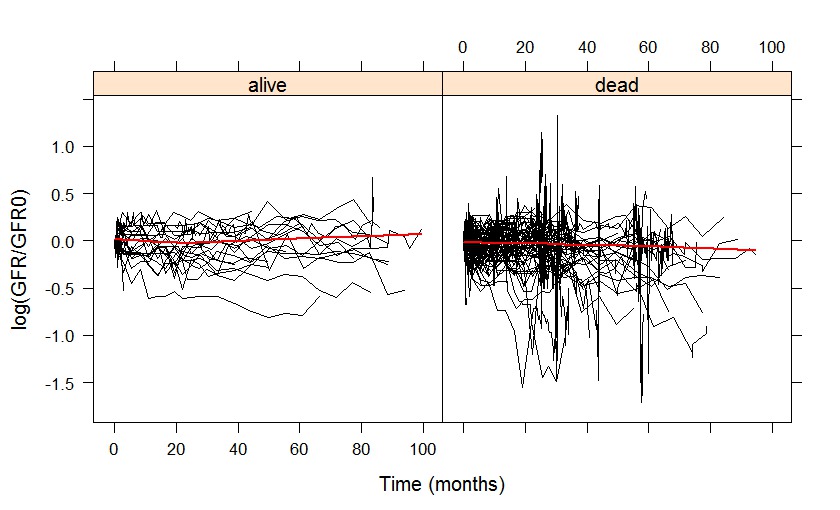