Cause-Specific Mortality among Patients with CKD and Atrial Fibrillation

Cause-Specific Mortality among Patients with CKD and Atrial Fibrillation

Atrial fibrillation (AF) is associated with death in patients with chronic kidney disease (CKD). However, whether the increased mortality in patients with CKD is due to cardiovascular or other causes is unclear. We examined the associations between AF and cause-specific mortality in a large CKD population.

We included 62,459 patients with eGFR 15-59 ml/min/1.73 m2 with AF (based on the presence of ≥2 ICD-9 codes for AF). Using the State mortality registry data, we classified deaths as follows: a) cardiovascular; b) malignancy-related; and c) non-cardiovascular/non-malignancy causes. We fitted Cox regression models for overall mortality and separate competing risk models for each cause of death category to evaluate their respective associations with AF. We conducted a separate analysis after excluding those with pre-existing malignancy.

During a median follow-up of 4.1 years, 19,094 patients died; cause of death data was available for 18,854 patients. After adjusting for covariates, AF was associated with 23% increased risk of all-cause mortality, 45% increased risk of cardiovascular mortality and 13% lower risk of malignancy-related mortality in this CKD cohort (Table 1). Proportion of deaths due to ischemic heart disease (23.1% vs 16.5%) and heart failure (5.3% vs 2.4%) were higher in those with AF than among those without AF. Deaths due to cerebrovascular diseases were similar in those with and without AF. Exclusion of those with malignancy at baseline yielded similar results except that no association between AF and malignancy-related deaths was noted. Results were consistent across various stages of CKD.

In a non-dialysis dependent CKD population, presence of AF was associated with higher all-cause and cardiovascular mortality. 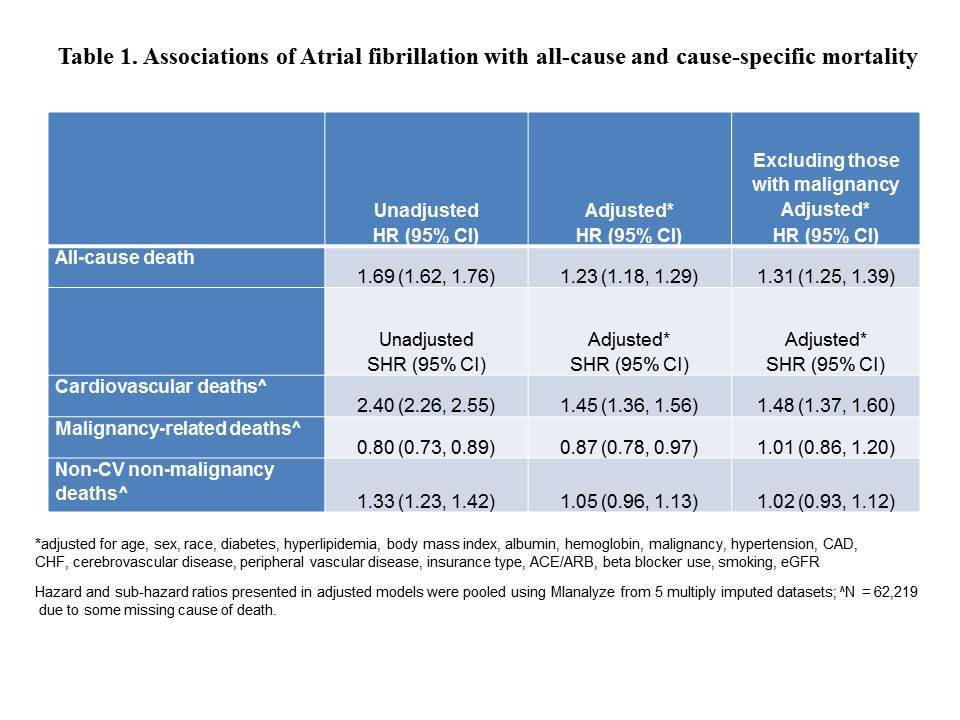