A Wolf in Sheep’s Clothing: Calciphylaxis, Innocuous at First Glance

A Wolf in Sheep’s Clothing: Calciphylaxis, Innocuous at First Glance

Calciphylaxis is a debilitating skin condition with high mortality seen in patients on dialysis who are at particular risk due to disordered calcium and phosphorus metabolism. Its early features are unfamiliar to many clinicians.

A 61 year old woman with diabetes on peritoneal dialysis for 5 years with adequate clearance by Kt/V was noted to have an erythematous painful lesion on the left leg (fig. 1A), which was diagnosed as shingles by her primary physician. She presented 2 days later to hospital for complaints of abdominal pain and was noted to have shallow ulceration of the lesion (fig.1B). She was evaluated by dermatology who felt that is was most consistent with venous stasis.

She followed up in dermatology clinic a few days after discharge and the ulceration had deteriorated as shown in fig. 1C. Concern for its progression prompted a skin punch biopsy that confirmed the diagnosis of calciphylaxis with histopathological features of vascular medial calcification (figs. 2A and 2B).

She was readmitted and transitioned to hemodialysis for aggressive therapy with sodium thiosulfate. Despite this, the area of involvement progressed extensively in the left leg and new lesions on the fingers developed. After 10 weeks of treatment the leg lesion appeared to stabilize with eschar formation and healing skin at the borders (fig. 1D).

Nephrologists and internists alike need to be aware of the initial innocuous presentations of calciphylaxis that may not raise clinical suspicion. The classic eschar is oftentimes a late feature. Early recognition can prevent the morbidity and mortality related to infections and amputations associated with delayed treatment, as the condition can progress rapidly. High vigilance for painful skin lesions is required in patients on dialysis. 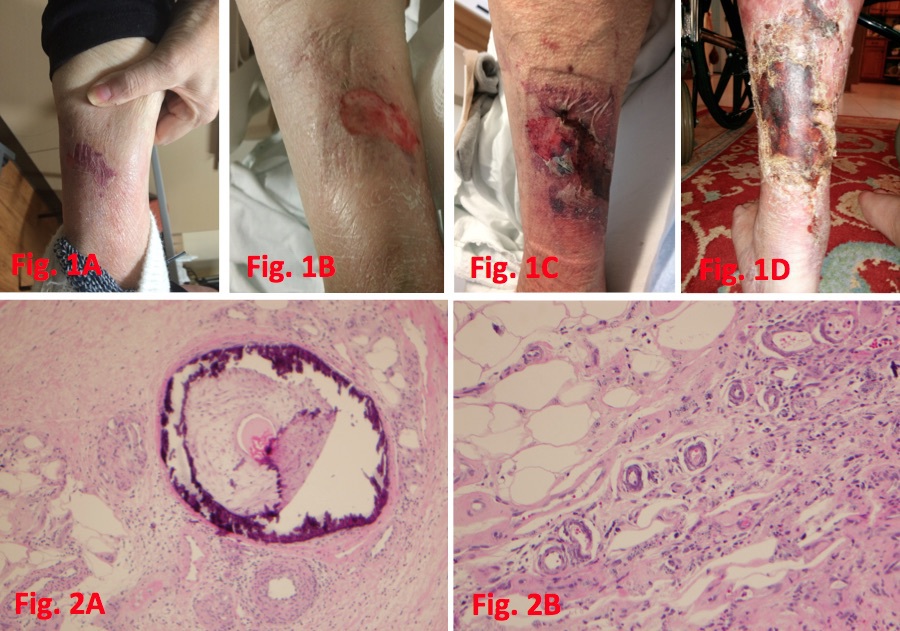