Chronic kidney disease (CKD) is potentially caused by genetic and environmental factors. Previous studies suggested joint effects of socio-economic status (SES) and genetic risk in obesity and diabetes, but this issue has not been investigated in CKD. We therefore tested whether SES and genetic risk interact in their association with eGFR decline and incident CKD (CKDi).

In the community-based PREVEND cohort, we calculated eGFR from creatinine and cystatin C at five examinations. We defined CKDi as eGFR<60 mL/min/1.73m2 during follow-up in those without baseline CKD. SES was measured by educational level and categorized into low, medium, and high (<secondary; secondary/equivalent; >secondary school). To quantify genetic risk, we used a genetic risk score (GRS) comprising 53 eGFR SNPs, weighted for published effects. In longitudinal analyses, we tested main effects of SES and GRS, as well as their interaction. Covariates were age, sex, smoking, BMI, urinary albumin, diabetes, hypertension, high cholesterol, and cardiovascular disease.

We included 3,393 subjects (Caucasian, 52% male, median age 49 yrs [IQR 40-60], median follow-up duration 11 yrs [IQR 4.7-12], N=109 baseline CKD, N=190 CKDi). Mean GRS did not differ between SES levels. In univariate analyses, both high GRS and low SES were associated with lower eGFR levels. Low SES was associated with steeper eGFR decline, but higher GRS was not. However, their interaction was significant (SES*GRS*time, p=0.01). A higher GRS was associated with steeper decline only in those with low SES (see Figure). Covariate adjustment did not affect these conclusions. Both SES and GRS were univariately associated with CKDi, but their interaction was not significant.

Our data suggest that in subjects with low SES the effects of genetic risk for kidney function decline are stronger, independent of CKD risk factors. Future studies need to corroborate these findings in larger samples and focus on aspects of SES that mediate this relation. 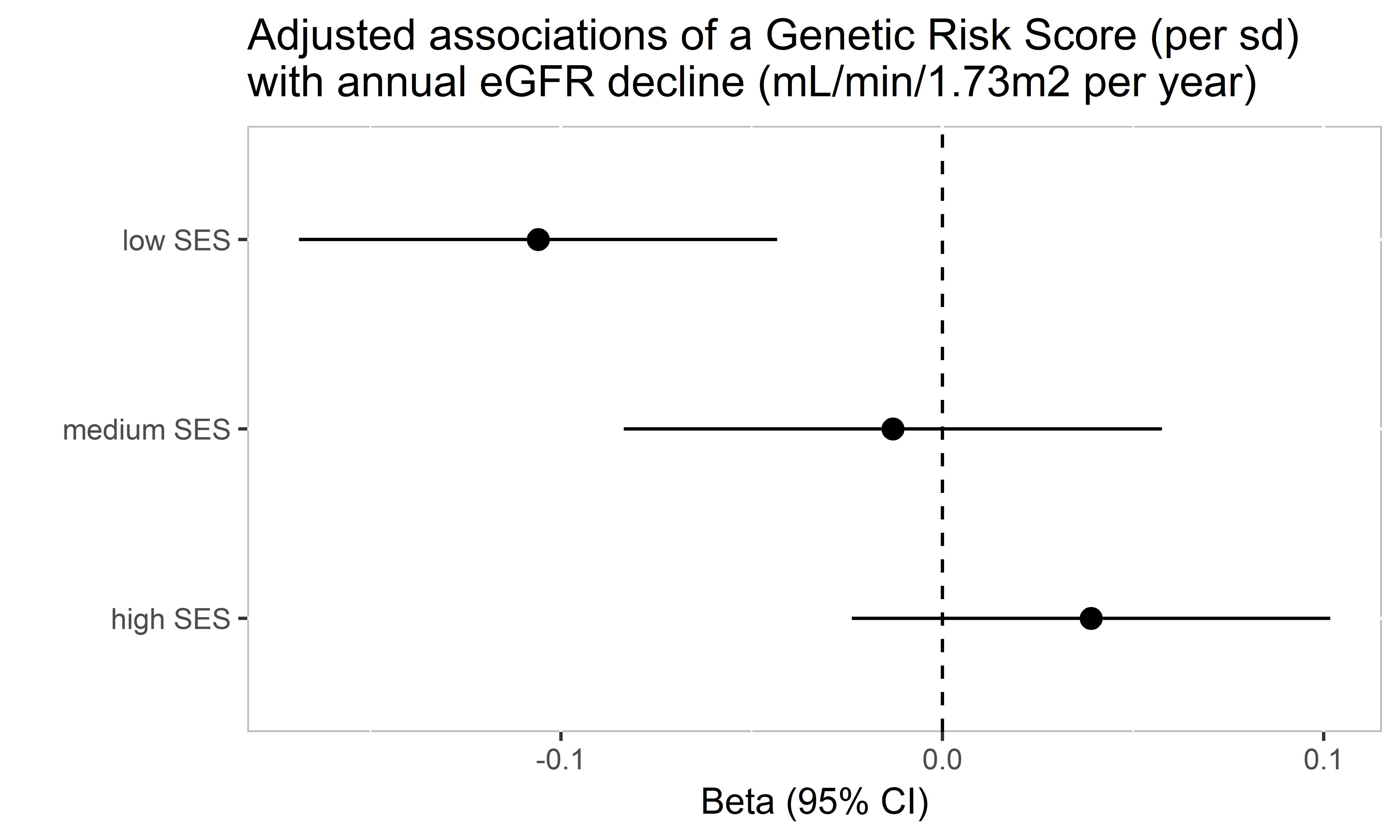