We have recently demonstrated that the SHRSP strain represents a spontaneous model of superimposed PE, characterized by defective trophoblast-dependent arterial remodeling and placental insufficiency. In the present study we have evaluated the contribution of paternal genotype to the placental pathology associated with the development of superimposed PE in this model.

A paternal effect model was established by mating normotensive Wistar Kyoto females to SHRSP males (WKYxSHRSP), and compared with control (WKYxWKY) and preeclamptic (SHRSPxSHRSP) pregnancies. Maternal blood pressure (BP) was determined pre-mating and on the morning of gestation day (GD)1, 7, 9, 13, 17 and 19. On the selected dates, 24 h urine and blood samples were collected. Animals were euthanized and implantation sites isolated for morphological analyses. Fetal and placental weights were recorded on GD18 and GD20

Pregnancies sired by SHRSP males displayed decreased numbers of implantation units versus control (WKYxWKY) pregnancies (Fig. 1A). Maternal SBP rose suddenly in WKYxSHRSP pregnancies, peaking on GD9 and returning to pre-pregnancy levels at term (GD19, Fig 1B). WKYxSHRSP dams displayed a significant increase in proteinuria on GD14 (Fig 1C) versus controls, consistent with glomerular damage. Pregnancies sired by SHRSP males showed signs of placental insufficiency and fetal growth restriction (FGR) on GD18 and 20 (Fig. 1D). At mid pregnancy (GD14), morphological alterations were evident in the placenta, including an expansion of the labyrinth layer and thickened walls of the uterine spiral arteries.

Hypertension as a paternal factor influences the kinetics of maternal blood pressure during pregnancy and compromised fetal growth, as a result of placental dysfunction. Identification of placental factors contributed by the paternal genotype may improve the understanding of disease mechanisms in hypertensive disorders of pregnancy. 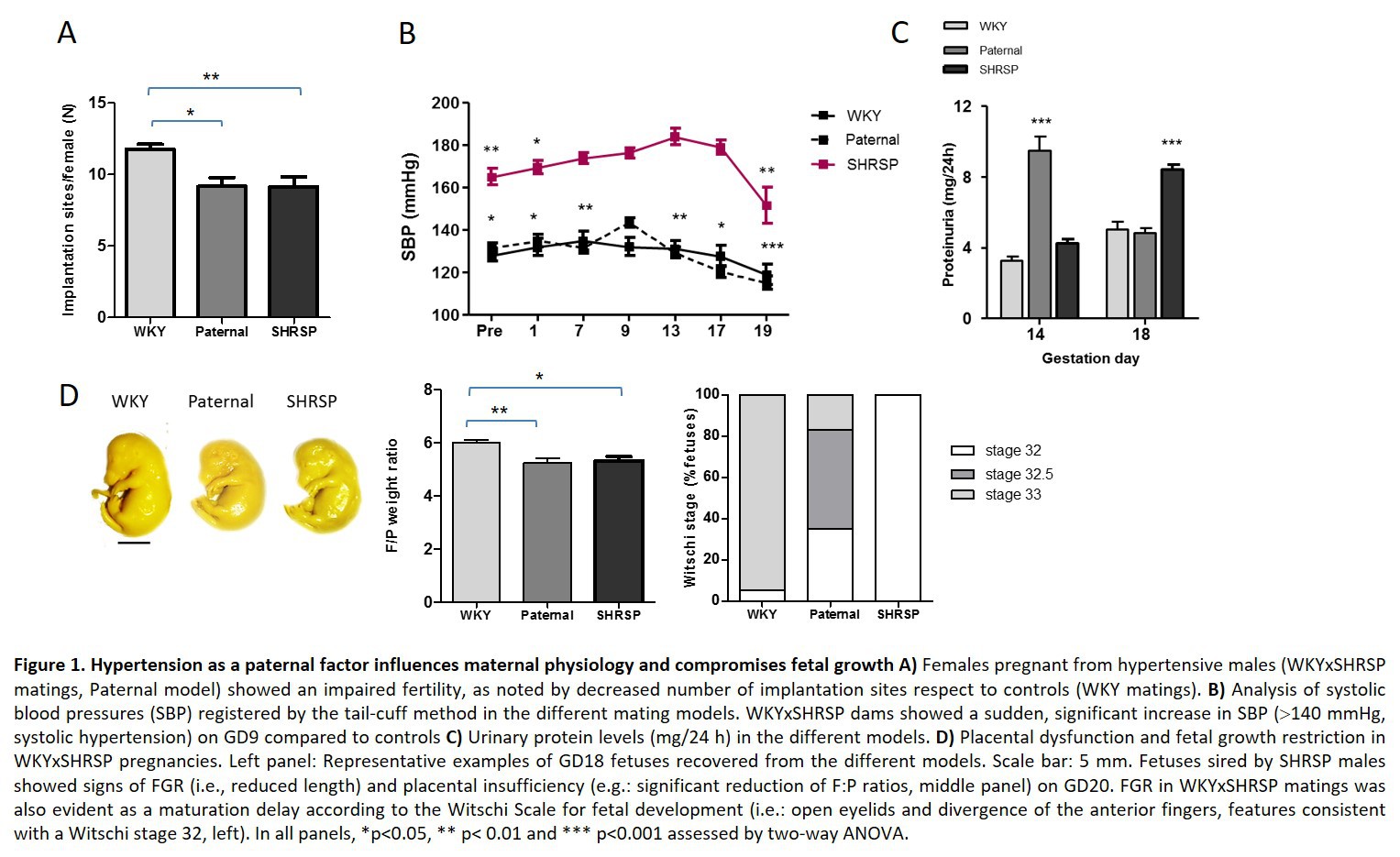