Cell-free DNA sequencing can provide an all-inclusive method to profile the microbiome, bacterial growth dynamics, and antibiotic resistant patterns. Herein, we utilize cell-free DNA sequencing of urine supernatants to test its utility in a cohort of kidney transplant recipients with and without urinary tract infections (UTI).

We collected serial urine supernatants from kidney transplant recipients with UTI (N=25 urine samples from 18 subjects) and without UTI (N= 20 samples from 7 subjects). We performed single-stranded library preparation and shotgun sequencing on all of the 45 urine supernatants (Illumina Next Seq, 75 bp by 75 bp). Microbial identification was performed using the Grammy pipeline.

In 24 of the 25 UTI samples, cfDNA identified the pathogen confirmed by bacterial culture (Fig. A) but also identified other pathogens in the same sample that were not detected by conventional urine culture. Uneven coverage over the origin of replication has been shown to reflect bacterial growth rates (Korem et al., Science 2015). We therefore utilized this novel principal and detected active growth rates in the pathogens causing UTIs (Fig. B). The antibiotic resistome profiles derived from cfDNA, shown in Fig. C, demonstrate the additional layer of information captured by cfDNA sequencing.

In this first-in-kind study, we report urinary cfDNA sequencing as an all-inclusive method to detect co-infections, bacterial growth rates, and antibiotic resistomes, which may be particularly useful in measuring the response to treatment in recurrent UTI in kidney transplantation. 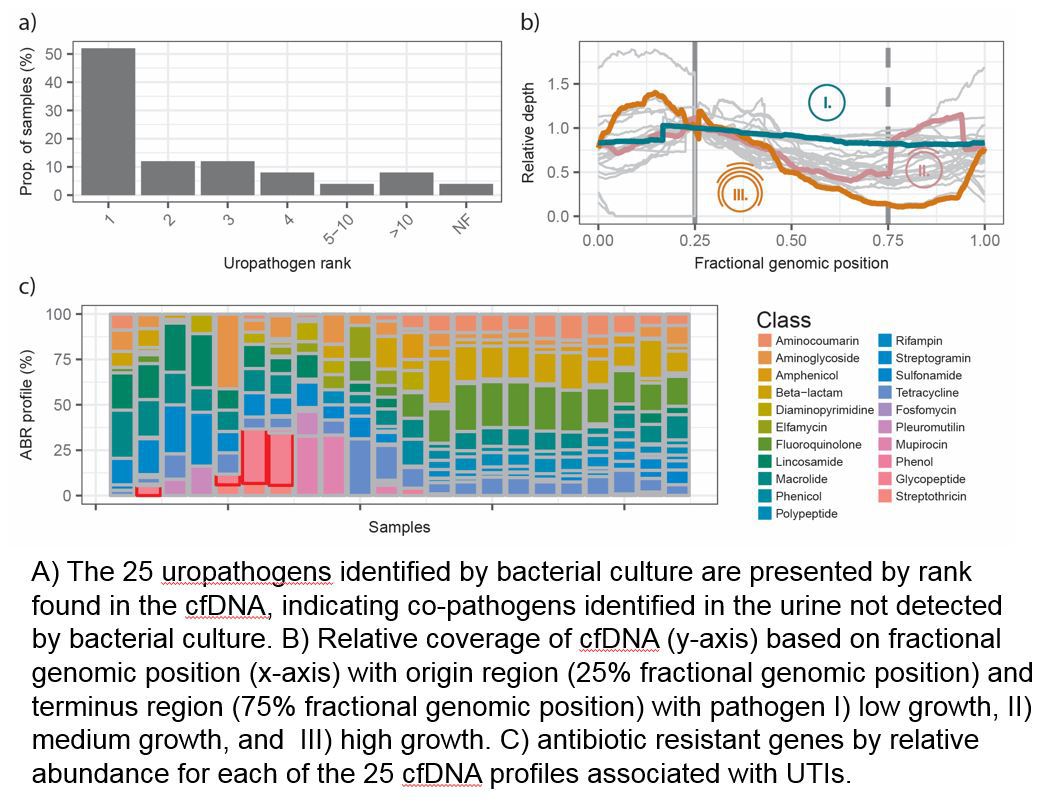