ANCA-Positive IgA Nephropathy: A Benign Coincidence or a Ticking Bomb?

ANCA-Positive IgA Nephropathy: A Benign Coincidence or a Ticking Bomb?

There have been a few reports of patients with IgA nephropathy (IgAN) who presented with circulating antineutrophil cytoplasmic autoantibodies (ANCAs). It remains unclear whether the presence of these antibodies reflects a mere incidental finding or a novel overlap entity with possibly untoward impact on the outcomes.

A 29-year-old woman referred for microscopic hematuria (MH) in the setting of positive ANCAs. She was first noted to have MH 2 years ago followed by mild hemoptysis and infiltrates on chest CT a few months later, which prompted a comprehensive autoimmune work up. Interestingly, both C-ANCA and P-ANCA were positive with anti-MPO and negative anti-PR3. Moreover, ANA and anti-dsDNA antibodies were found positive. Bronchoscopy ruled out diffuse alveolar hemorrhage. Serum creatinine was normal at 0.8 mg/dL, and urine studies revealed MH and mild proteinuria of 350 mg/g of creatinine. Renal biopsy was consistent with IgAN with mesangial expansion and electron dense mesangial deposits without cellular crescents or segmental necrosis [figure]. In the absence of histologic findings compatible with pauci-immune glomerulonephritis, the decision was made not to use immunosuppression and to follow expectantly.

There have been a few previous reports of ANCA positivity in the setting of IgAN; most cases presented with nephritic sediment, histologic picture of crescentic glomerulonephritis, and rapidly worsening renal function. ANCA-positive IgAN without these features is extremely rare. As the timeline of appearance of ANCAs need not correlate with that of crescentic IgAN , we opine that such patients should be closely monitored and a repeat biopsy be considered if there is any change in their renal manifestations. 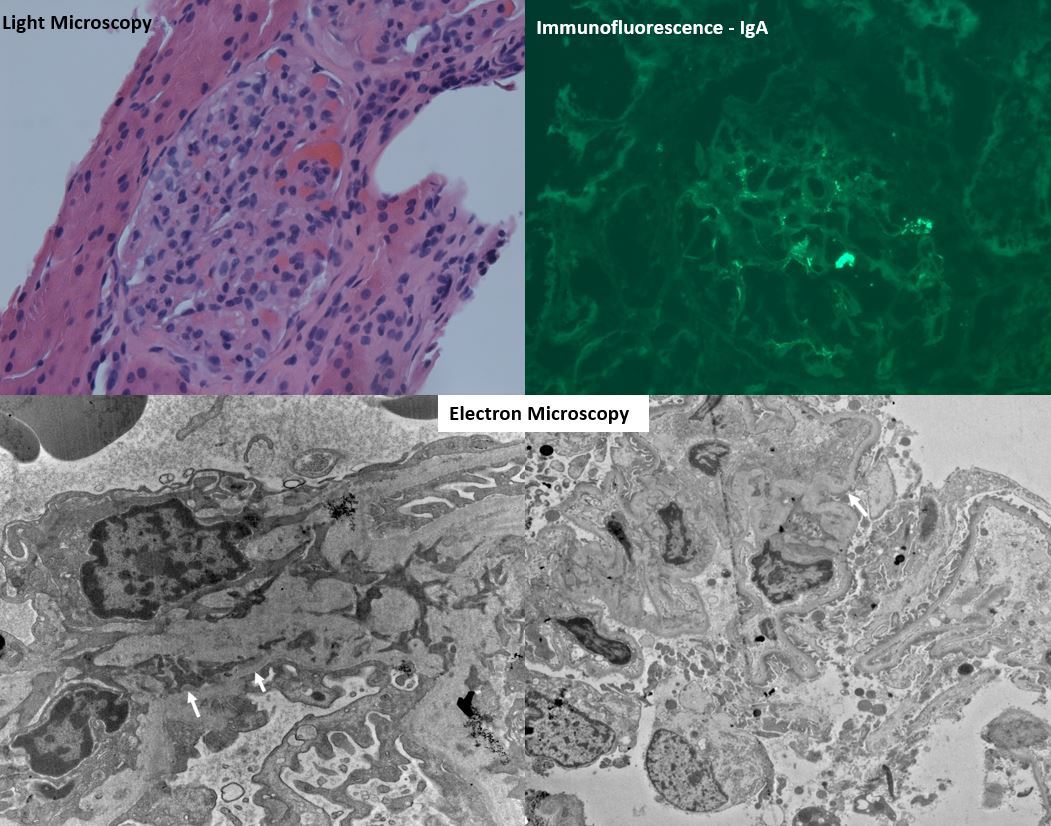