PTLD is well described, but the long-term incidences and risk factors for PTLD for adult and paediatric renal transplant recipients remain unclear.

Using data from the Australian and New Zealand Dialysis and Transplant Registry (1963-2015), the cumulative incidence of PTLD in all kidney transplant recipients was calculated using a competing risk of death model and compared with age-matched population-based data using standardized incidence ratios (SIR). Risk factors for PTLD in the modern era of immunosuppression (from year 2000) were assessed using competing risk Cox regression.

Lymphoproliferative disease in transplant recipients occurs at higher rates than in the general population, particularly in paediatric recipients. EBV-negative patients and those with diabetes are at increased risk of PTLD, however PTLD rates have been decreasing over the last 15 years. 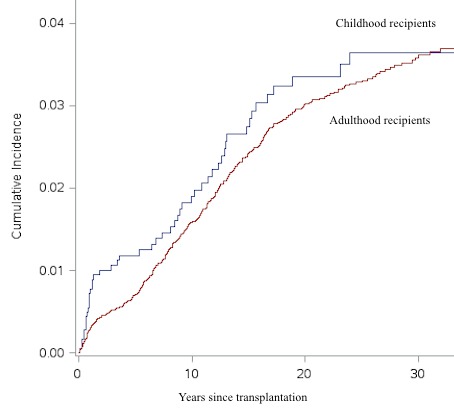