Genetics of Serum Urate Concentrations and Gout in a High-Risk Population, Patients with CKD

Genetics of Serum Urate Concentrations and Gout in a High-Risk Population, Patients with CKD

Gout is the most common inflammatory arthritis in many countries with a strong genetic component. Individuals with chronic kidney disease (CKD) represent a high-risk population for gout. Genetic risk factors for gout and their interactions with clinical factors in CKD are understudied.

Genome-wide association studies of serum urate and gout were performed in 4941 CKD patients (1217 with gout) in the German Chronic Kidney Disease study. Effect sizes of 26 known serum urate-associated SNPs from population-based studies were examined. Interactions of urate-associated variants with serum urate-altering medications and clinical characteristics of gout were evaluated.

Genome-wide significant associations (p<5E-08) with serum urate and gout were identified for the known loci SLC2A9 and ABCG2, encoding urate transporters. Effects of 26 known SNPs were of similar magnitude in CKD patients and population-based studies (Figure 1). Gene-medication interactions implicated interactions (e.g. ABCG2 rs2231142 and loop diuretics) but were not significant when accounting for multiple testing. Effects of ABCG2 rs2231142 on serum urate were higher in those with lower eGFR, consistent with the transporters role in urate excretion. Associations with gout in specific joints were strongest for SLC2A9 rs12498742 in elbows and wrists, and ABCG2 rs2231142 in knees and ankle joints.

Known genetic variants in SLC2A9 and ABCG2 were associated with serum urate and gout in a CKD cohort with effect sizes similar to population-based studies. Studying pharmacogenomic interactions is challenging in the setting of polypharmacy in CKD. CKD patients are at high risk of gout due to reduced kidney function, diuretics intake and genetic predisposition. 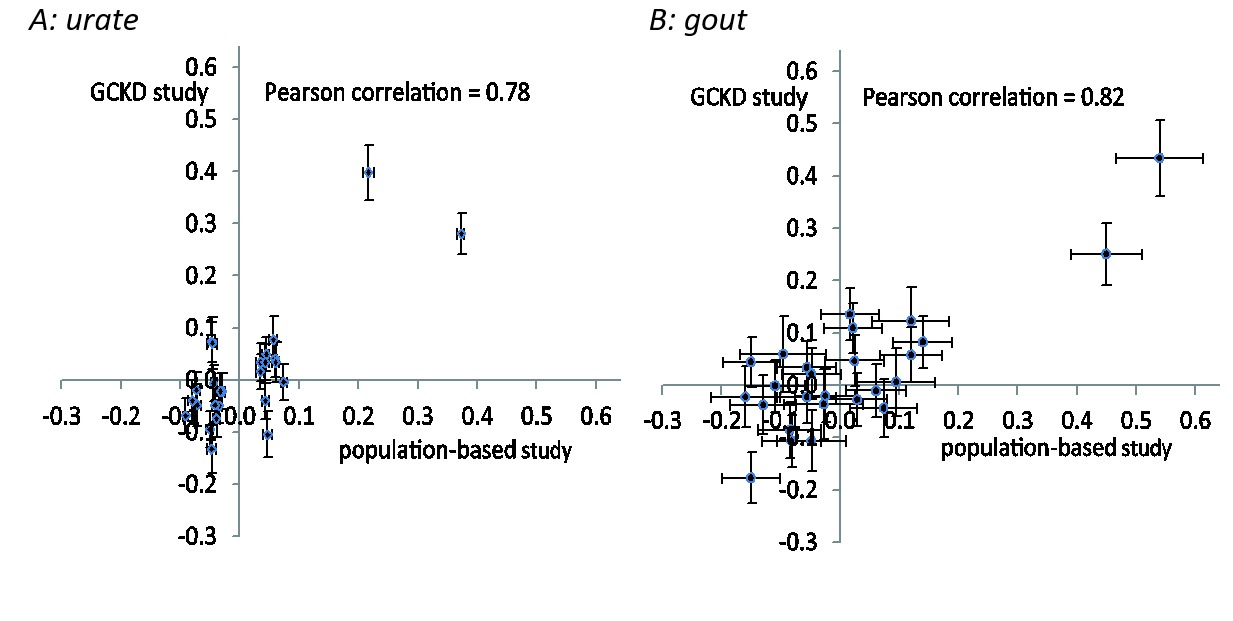