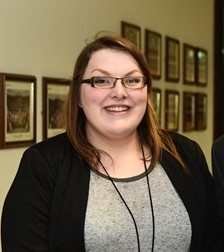 Caragh Stapleton is a PhD candidate in the Department of Molecular and Cellular Therapeutics in the Royal College of Surgeons in Ireland. Her research interest is in the area of human and statistical genetics with a particular interest in renal and transplant genetics. More specifically, her work focuses on the area of genomics of transplant outcomes and complications including allograft function and post-transplant skin cancer.

Multiple genetic loci have been identified for non-melanoma skin cancer (NMSC) in the general population. Polygenic risk score (PRS) was defined as the sum of all alleles associated with a trait weighted by the effect size of that allele as determined by a previous genome-wide association study (GWAS). We tested whether PRS, calculated using a GWAS of NMSC in a non-transplant population, can be used to determine risk of developing and time to NMSC post-kidney transplant.

Post-kidney transplant NMSC cases (n=155) and controls (n=442) were collected from Tennessee, Ireland and Scotland. Genetic variants that reached pre-defined levels of significance were chosen from a squamous cell carcinoma (SCC), and a basal cell carcinoma (BCC) GWAS, both conducted in non-transplant populations. Using these GWAS results, BCC and SCC PRSs were calculated at each p-value threshold (pT) for each sample in the renal transplant cohorts. PRSs were normalized so mean = 0 and standard deviation = 1. PRSs were tested as a predictor of case: control status in a logistic regression model and time to NMSC post-transplant in a survival model. Age of recipient at transplant, recruitment centre, azathioprine exposure and the first four principal components were included as covariates in both models.