Numerous Colon-Derived Solutes Are Efficiently Cleared by the Kidney

Numerous Colon-Derived Solutes Are Efficiently Cleared by the Kidney

Previous studies have identified solutes derived from colon microbes that are normally excreted in the urine. The current study employed metabolomic analysis to identify additional solutes in this class and profile their renal clearance.

Samples from patients with total colectomies (n=12) and age matched controls (n=17) were analyzed using an established metabolomic platform. Solutes were considered colon-derived if they met both of the following criteria: 1) mean excretion rate was greater than four-fold higher in individuals with colons than without colons 2) the difference in excretion between the groups was assigned significance with a false discovery rate (q value) < 0.05. 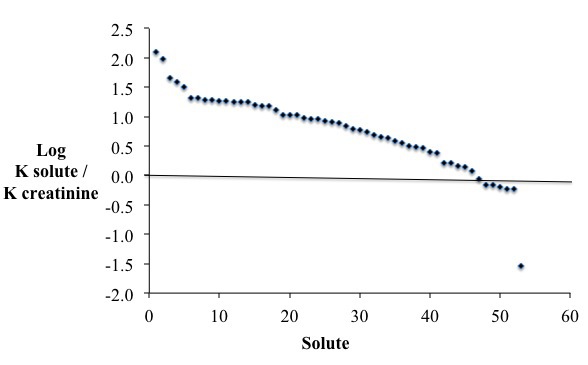