Does Your Differential for Glomerulonephritis in African Americans Include IgA Nephropathy?

Does Your Differential for Glomerulonephritis in African Americans Include IgA Nephropathy?

Despite being the commonest primary glomerulonephritis in the world, IgA Nephropathy (IgAN) is rarely reported among African Americans (AAs), who otherwise have high renal disease burden. As nephrologists, we have been taught that IgAN should be considered as the last differential for GN in AA patients unless they have HIV. This assumption is based on the ‘reported’ rarity of this disease in AAs and the fact that AAs make up more than 50% of the new cases of HIV infection in the US. However, IgAN is being increasingly recognized in the non-HIV AA population. Factors such as level of disease awareness, access to appropriate diagnostic facilities and referral patterns may play a role in the underdiagnosis of IgAN in AAs. Moreover, there are reports suggesting that these patients may have more severe disease at presentation.

A 48-year-old woman was seen for IgAN. Her baseline serum creatinine (Scr) of 1.2 mg/dL. She was evaluated at an outside facility 3 months ago, when the Scr was 1.4 mg/dL with a UPCR of 1.7 g/g and 60/hpf RBCs in the urine. A month later, her Scr increased to 1.7mg/dL, which prompted a renal biopsy. It was suggestive of crescentic IgAN but the sample was inadequate. ANA, ANCA, HIV and hepatitis serologies were negative and complements normal. In our clinic, BP was 110/78mmHg, Scr 1.35 mg/dL and PCR ~1g/g. We elected to rebiopsy her to confirm the diagnosis of crescentic IgAN in an AA patient and possible treatment with an alkylating agent. It was surprisingly consistent with IgAN [Fig.1]. As there were fibrocellular crescents in only 2 of 11 glomeruli and the Scr remained stable, we chose to manage her conservatively.

Our case serves as a reminder that IgA nephropathy does occur in AAs and needs to be considered in the differentials when they present with nephritic picture. 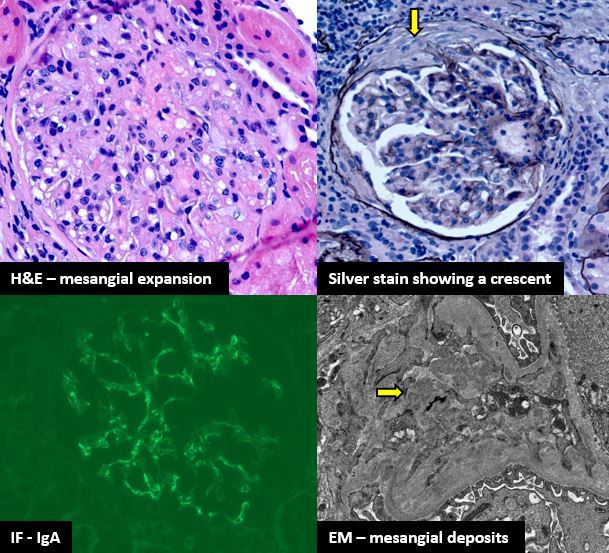