Single Questions for the Diagnoses of Restless Legs Syndrome, Anxiety, and Depression in Hemodialysis (SQUIRREL)

Single Questions for the Diagnoses of Restless Legs Syndrome, Anxiety, and Depression in Hemodialysis (SQUIRREL)

Symptoms in patients with kidney disease, such as restless leg syndrome (RLS), depression and anxiety, are common, reduce quality of life and are potentially treatable. Simple, accurate screening tools are needed. We examined the operating characteristics of the single questions for RLS, depression and anxiety from the revised Edmonton Symptom Assessment System (ESAS-r) in hemodialysis patients.

We conducted a cohort study of adults receiving chronic hemodialysis in Hamilton, Canada. Diagnoses of RLS, anxiety and depression were made using the 2012 IRLSSG criteria and the Hospital Anxiety and Depression Scale. Participants were asked to the degree to which they experienced restless legs, anxiety and depression using the ESAS-r 11-point scales anchored at 0 (no symptoms) and 10 (worst possible symptoms). ESAS-r single questions were compared to their reference standards using cutoffs greater than 0 indicating the presence of symptoms using logistic regression from which receiver operating characteristics (ROC) curves were generated. 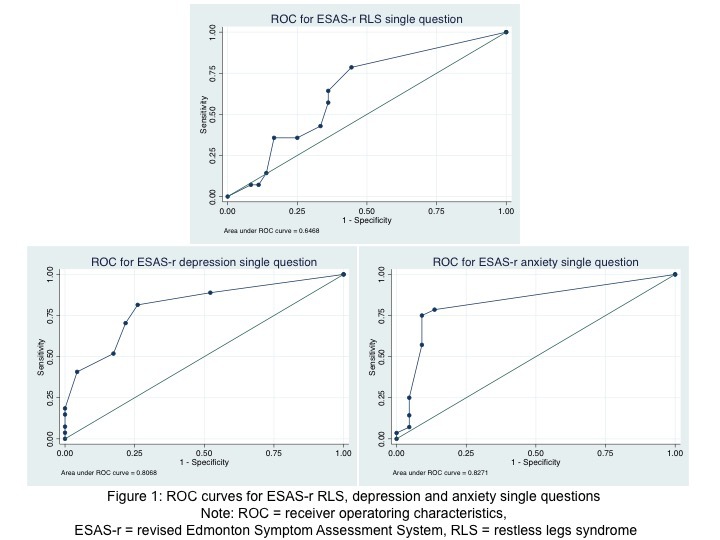