Anemia is a common complication in patients with ESRD due to decreased production of erythropoietin in the diseased kidneys. ESAs have been developed to combat anemia in ESRD, and now are widely used to maintain hemoglobin levels in the range of 10 - 11 in ESRD outpatients. ESRD patients who are hospitalized are at greater risk to develop anemia than their outpatient counterparts. Despite this, ESA use rates in the hospital for patients with ESRD patients are exceedingly low. Our magnitude assessment shows that only 30% of patients received their ESA while an inpatient at UCH.

Given the known harms associated with anemia in the ESRD population, the high rates of anemia following hospitalization, and the low use of ESAs in the inpatient setting, we set out in this QI project to increase inpatient ESA administration from 30% to 60%. Our intervention was to implement a standardized ESA dosing protocol for all ESRD patients based on their outpatient dose and inpatient hemoglobin values (Figure 1). Hold parameters included blood pressure > 180/100, and active myocardial infarct (MI), stroke, or thrombosis. The hemodialysis template was also modified to prompt the provider to include ESA administration information.

Since implementation of the ESA administration interventions in April 2017, 92 ESRD patients have been hospitalized a total of 138 times. During these hospitalizations, the rate of ESA administration, defined as receiving one or more doses of an ESA as an inpatient, was 70%. The rates of thrombosis, cardiac events, and strokes has remained constant since implementation. Hemoglobin values at 3 months from discharge are being collected, but are not yet available for the majority of our patients.

The implementation of an ESA dosing algorithm results in higher rates of inpatient ESA administration without an increase in complications. 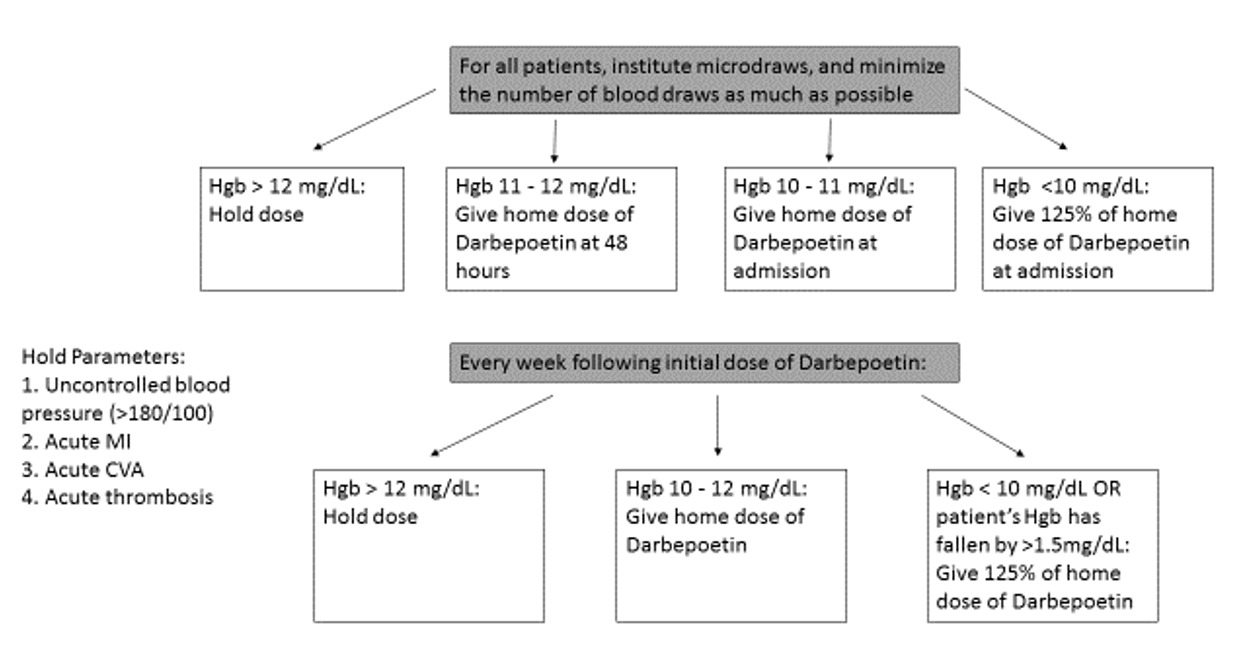