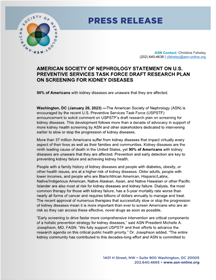 The American Society of Nephrology (ASN) is encouraged by the recent U.S. Preventive Services Task Force (USPSTF) announcement to solicit comment on USPSTF's draft research plan on screening for kidney diseases. This development follows more than a decade of advocacy in support of more kidney health screening by ASN and other stakeholders dedicated to intervening earlier to slow or stop the progression of kidney diseases.

Stay on top of the latest happenings with the Society and in the nephrology world by subscribing to the ASN Press Release RSS Feed.