Vacuolated Podocytopathy: A Novel Injury with the Use of BRAF Inhibitors

Vacuolated Podocytopathy: A Novel Injury with the Use of BRAF Inhibitors

With expanded use of BRAF inhibitors, nephrotoxicities including acute interstitial nephritis (AIN) and nephrotic syndrome (NS) have been described in recent literature. We present a novel case of vacuolated podocytopathy with sub-nephrotic range proteinuria associated with BRAF inhibition.

A 64-year-old woman with non-small-cell lung cancer on dual BRAF/MEK inhibition with Vemurafenib and Trametinib, was referred for AKI evaluation. Her serum creatinine (SCr) was 2.1 mg/dL, increased from 1.0 mg/dL 2 months prior. Urine protein/creatinine ratio was between 0.4 – 0.7. Urinalysis was otherwise non-contributory. BRAF inhibition was held due to presumed AIN, but renal function only improved to 1.4 mg/dL. Treatment was restarted due to lack of therapy options with increase in SCr to 2.0 mg/dL. A renal biopsy was performed for definitive diagnosis. Pathology surprisingly showed a minimal interstitial infiltrate but extensive podocyte injury with cytoplasmic vacuolization and nearly global foot process effacement (FPE) was seen on electron microscopy. Given stable renal function, treatment was continued. Her SCr remained around 2.0-2.2 mg/dL and proteinuria remained < 1g until her death from septic shock few months later.

BRAF inhibitors are linked with AIN and NS with diffuse FPE. We describe a novel finding of podocyte vacuolization and FPE with sub-nephrotic proteinuria. We recommend renal biopsy for patients on BRAF inhibitors with AKI of undetermined etiology to allow precise identification of the renal lesion. Our patient continued on BRAF inhibitors with stable CKD and proteinuria, suggesting that drug withdrawal is not necessary for all patients, particularly those with limited treatment options. 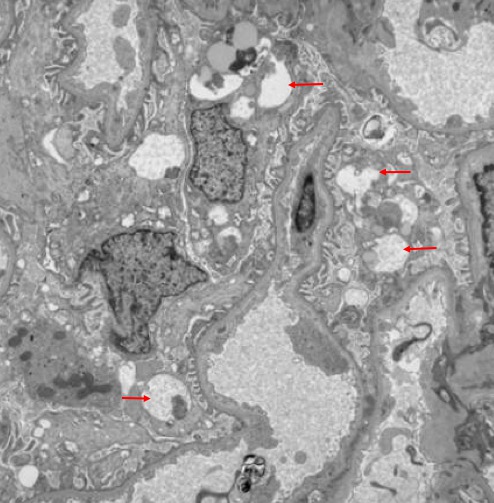